After a wonderful dinner in a friend’s backyard last night, I felt the gentlemanly thing to do is walk Moppit this morning. It was a reunion of Casa de las Poetas former residents. John & Linda and Jimmy & Gina moved elsewhere in town.

Then the pandemic hit. It was good to sit around a table again, outside, and safely distanced.

I had my first fake-meat burger — whatever they are called. It was quite satisfactory and if I ever go vegetarian, I will order a case.

So, Rose usually walks Moppit in the morning and I take the early evening shift. Today, I hoped she would sleep in for once. Naturally, she was preparing her yoga mat before we even hit the street. Dedicated. END_OF_DOCUMENT_TOKEN_TO_BE_REPLACED

Lesson learned: The first half of a New York Times headline sounded just great, “Air travel surges by 123 percent!” But read on: “(Beware of misleading data like that)”

Marking the rise and fall of events by using percentages is an old dodge in the misinformation game. Economist Neil Irwin explains why you have to look behind the headlines, at the raw numbers — especially in these unusual times. END_OF_DOCUMENT_TOKEN_TO_BE_REPLACED

#1. GREAT ESCAPE: The plan was for me to get up early and walk Moppit so Rose could take an online yoga class before the sun turned up the heat.

The internet was down.

END_OF_DOCUMENT_TOKEN_TO_BE_REPLACED

#1A FACETIME WITH FAMILY: Spent almost an hour in a video chat with Ryan and Larisa and grandson Augie, who is saying his first words! They remain in place in San Francisco where it can’t be easy. One of the world’s most beautiful cities outside your door … and you can only look out your window.

#2 BIG OOPS: The worst thing you can do upon waking is open up Facebook.  Trust me, bad news accumulates while you sleep. All this rage with no outlet …

B. Boston hospital team makes secret rendezvous in mid-Atlantic region to score protective medical supplies, as feds threaten to take them away.

C. Stimulus funds will reward more than 43,000 MILLIONAIRES with an average $1.6 million each.

#3 WELCOME RELIEF: Found in Garrison Keillor’s Letter from Manhattan.  Crafting good limericks and simplifying life — that’s the life. “It’s been a quiet week in apartment 12B.” That’s the stuff.

#4 TELEVISION: “CBS Sunday Morning” is like nestling in with an old friend. I can hear my blood pressure settling down for the day.

#5 DISCOVERY: Nobody has a lock on the truth about coronavirus — yet — but everyone has an opinion. I found a reasonable voice in Richard Lehman, professor of Shared Understanding of Medicine at the University of Birmingham.  His post in the British Journal of Medicine opinion page is calm, reasoned, informative, fact-based. I look for more from him.

L. Frank Baum wrote 14 “Oz” books, the unevenness of which Vidal excuses because the man was writing 48 other books at the same time.

I’ll admit it, “Ummagumma” and me on psychedelics did not go well in late-1969. It goes better with the Wizard of Oz. Wish I knew that then …

#7 VIDEO: I’m not sure where I found it but there is an amazing video of liquid-limbed hipsters holding a dance-off to the Devil’s Music, jazz, baby. On further research, I found an 8-minute version that says this is a Sunday night party during the Jazz Roots Festival in Paris in 2015. Swing, baby, swing.

#8 I WROTE A POEM: Titled “Remembering to Dance Like Nothing Else Matters.” The first half was inspired by this video and the rest is based on something that happened to me in the early-1980’s in Rosarito Beach, Baja, Mexico.  I’m not a poet. These things just happen.

#9 PODCAST: While walking Moppit tonight, I tuned into the New York Times show “The Daily.” On Sundays, the program presents a spoken piece of long-form journalism borrowed from partner app AUDM. Today’s is “The Woman Who Might Find Us Another Earth.”  Sara Seger is a brilliant astrophysicist, a certified genius, but befuddled by the most common challenges of living on Earth.

#11  I leave you with this, the BEST PLAGUE PARODY SONG YET:

# 1 Friday is laundry day and the day to strip beds and do sheets. I actually like folding laundry, something I have been doing since I was a very little kid. We are a family of eight sons and a daughter. The division of labor was a means of survival.  My father was an engineer and a big fan of early efficiency-expert Frank Gilbreth, whose son Frank Jr. wrote  a memoir in 1948, titled  “Cheaper by the Dozen.”  I read the book several times before I was 12 years old.

#2 Chekov: Think your times are hard? Read some of his short stories. First, the one above is NOT “The Postman.”That was a 1997 dystopian movie starring Kevin Kostner. The correct title is “At the Post Office.”  It is silly … until the very last line, the implications of which, turn this light and slight tale into a potential novel.

But one Chekov tale is never enough!

#3 I found a PDF of a book with 30 Chekov short stories, spanning his whole career. It comes with an insightful introduction and hot-linked annotations. So far, I’ve read “The Huntsman,” “The Death of a Clerk,” and “Small Fry.”

#4 Podcast: While folding laundry, listened to “The Daily”  interview with Congresswoman Alexandria Ocasio-Cortez. Yes, she will vote for Joe Biden but it will taste like Castor Oil.

#5 Subscribed to a new podcast: “Rabbit Hole” from NYT. Series will explore how the Internet changes people. The first episode is absolutely fascinating as a programmer explains how Facebook and YouTube are programmed to capture your brain (basically). By the way, my search for “Rabbit Hole podcast”  came up with 21 possibilities. Think about that.

#6  Garrison Keillor laments the loss of baseball season and ponders the outcome if the Vikings had decided to settle on Manhattan island, rather than the European crowd. “We’d have universal health care and a highly developed system of state socialism. Vikings are a calm and reasonable people, they don’t go around yelling “Make Norway Great Again” …

#7 Heather Cox Richardson “Letters from an American”: Governors are organizing into bi-partisan scrums to tackle the decision-making responsibilities abdicated by Trump.  “We will make decisions based on facts, science, and recommendations from experts in health care, business, labor, and education.” (All of which must have totally confused the president.)

#8 Virtual Camino walk enters Day 8, from Torres del Rio to Logrono. The 39-day walk is now a closed group but more than 2200 people signed up to take the “walk” with a San Miguel de Allende woman who plans other “walks” in the future.  A nice meditative break in the day.

#9 Rolling Stones video interview with Roger Waters, estranged bassist, composer and singer for Pink Floyd. Who am I kidding, he was Pink Floyd. (Sorry, David Gilmour, you’ve always been shite without him.) Roger seems to have become a very cranky old man and I almost expected him to start singing “Hey, you kids, get offa my lawn …”  He would have toured this summer and the concept sounded intriguing. In 2021, perhaps.

#10  MOVIE: “Life With Father” (1947) comedy starring William Powell, Irene Dunne, and little Elizabeth Taylor. Proof once again that sons can always exact revenge on their fathers by writing a memoir. (See “Cheaper by the Dozen,” above.) This one ran over 400 nights as a Broadway play and the movie is much beloved, although the bombastic Powell gave me a headache. 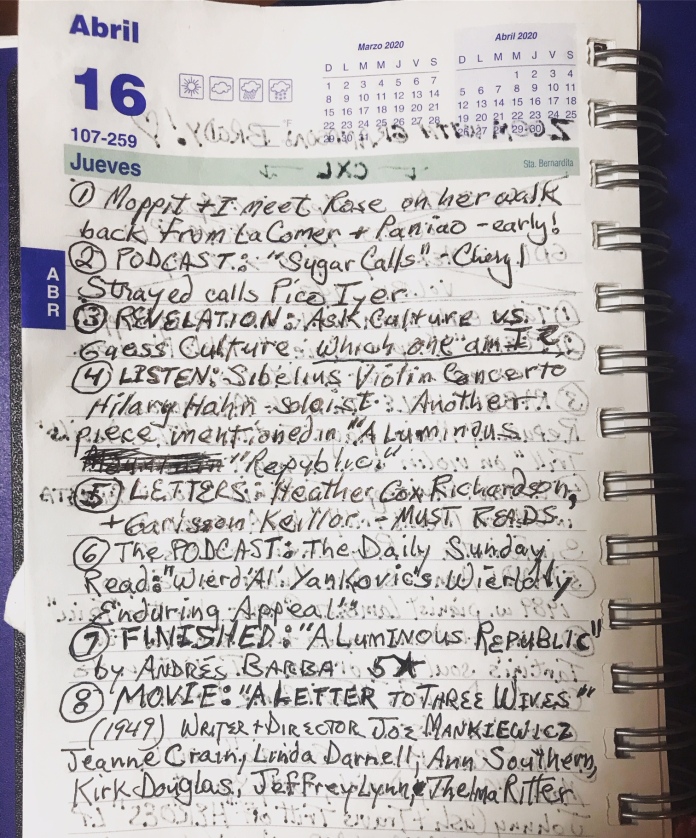 On March 27 I began logging my day’s activities into my now-useless appointment calendar. For the time being, there would be no luncheon dates, no concerts, no coffee meetups, no flights to visit grandchildren, no weddings, no visit to Mexico City with friends.

But how was I filling my days? They seemed to be drifting — without recollection of where I’d been, what I’d accomplished, where I was headed — from one gray fog-bound sea to the next.

“Naps,” seemed to be the only achievement that I recalled with any clarity. That, and pointlessly angry and condescending posts on Facebook. I had to be doing more than clicking “Like,” “Angry, “and “Love” buttons, right? Oh, and “HaHa.” END_OF_DOCUMENT_TOKEN_TO_BE_REPLACED