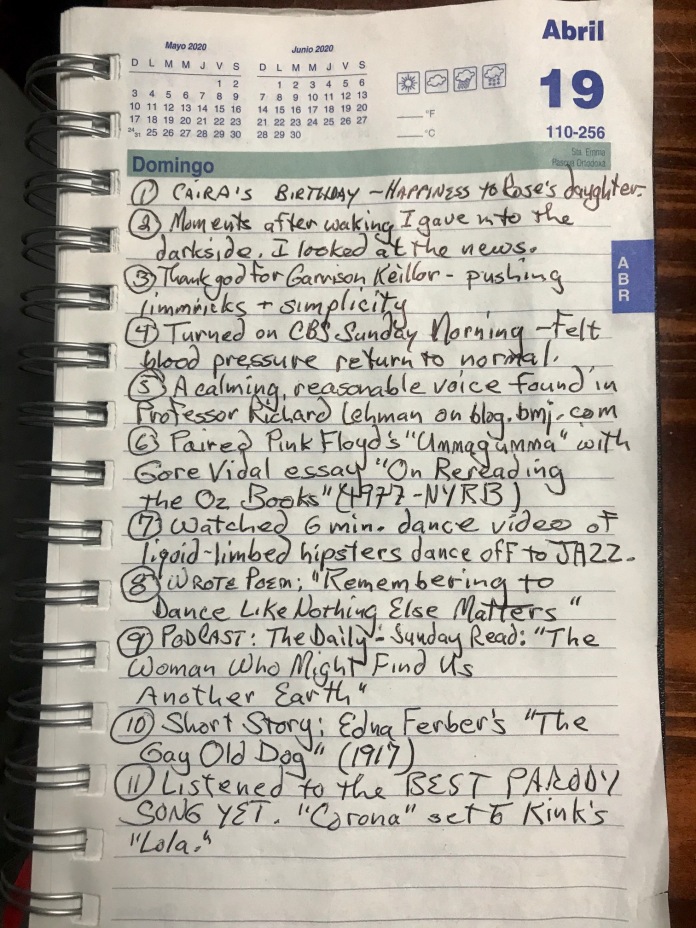 #1A FACETIME WITH FAMILY: Spent almost an hour in a video chat with Ryan and Larisa and grandson Augie, who is saying his first words! They remain in place in San Francisco where it can’t be easy. One of the world’s most beautiful cities outside your door … and you can only look out your window.

#2 BIG OOPS: The worst thing you can do upon waking is open up Facebook.  Trust me, bad news accumulates while you sleep. All this rage with no outlet …

B. Boston hospital team makes secret rendezvous in mid-Atlantic region to score protective medical supplies, as feds threaten to take them away.

C. Stimulus funds will reward more than 43,000 MILLIONAIRES with an average $1.6 million each.

#3 WELCOME RELIEF: Found in Garrison Keillor’s Letter from Manhattan.  Crafting good limericks and simplifying life — that’s the life. “It’s been a quiet week in apartment 12B.” That’s the stuff.

#4 TELEVISION: “CBS Sunday Morning” is like nestling in with an old friend. I can hear my blood pressure settling down for the day.

#5 DISCOVERY: Nobody has a lock on the truth about coronavirus — yet — but everyone has an opinion. I found a reasonable voice in Richard Lehman, professor of Shared Understanding of Medicine at the University of Birmingham.  His post in the British Journal of Medicine opinion page is calm, reasoned, informative, fact-based. I look for more from him.

L. Frank Baum wrote 14 “Oz” books, the unevenness of which Vidal excuses because the man was writing 48 other books at the same time.

I’ll admit it, “Ummagumma” and me on psychedelics did not go well in late-1969. It goes better with the Wizard of Oz. Wish I knew that then …

#7 VIDEO: I’m not sure where I found it but there is an amazing video of liquid-limbed hipsters holding a dance-off to the Devil’s Music, jazz, baby. On further research, I found an 8-minute version that says this is a Sunday night party during the Jazz Roots Festival in Paris in 2015. Swing, baby, swing.

#8 I WROTE A POEM: Titled “Remembering to Dance Like Nothing Else Matters.” The first half was inspired by this video and the rest is based on something that happened to me in the early-1980’s in Rosarito Beach, Baja, Mexico.  I’m not a poet. These things just happen.

#9 PODCAST: While walking Moppit tonight, I tuned into the New York Times show “The Daily.” On Sundays, the program presents a spoken piece of long-form journalism borrowed from partner app AUDM. Today’s is “The Woman Who Might Find Us Another Earth.”  Sara Seger is a brilliant astrophysicist, a certified genius, but befuddled by the most common challenges of living on Earth.

#11  I leave you with this, the BEST PLAGUE PARODY SONG YET: