Poet and author Juan Felipe Herrera reads from one of his 30 published books at the San Miguel Writers’ Conference and Literary Festival #smwc2020 on Saturday, Feb. 15, 2020.

Prologue: Juan Felipe Herrera was Poet Laureate of the United States 2015-17. He is an artist, a teacher, the author of 30 books across all genres, and he plays a mean harmonica.

As a keynote speaker at the 15th annual San Miguel Writers’ Conference and Literary Festival, Herrera put the harmonica to good use. He also introduced plenty of “participatory poetry,” goading on the audience to share the load as he read his poems.

Herrera’s commentary is every bit as poetic as his published works. In fact, it was hard sometimes to see where his beguiling banter ended and a poem began.

Herrera’s life was a rough one from the start. His family traveled up and down California in the migrant labor trucks, from harvest to harvest. 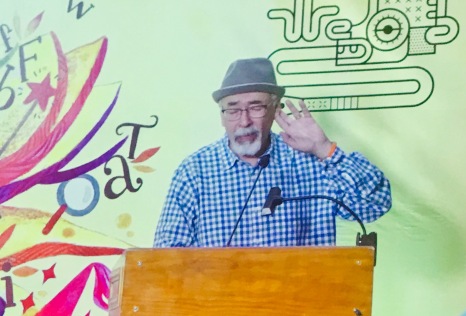 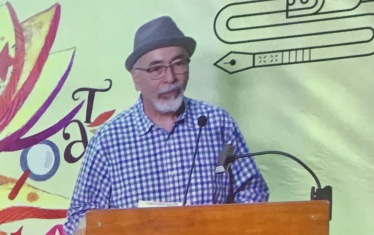 “I started with the bare minimum,” he recalls. “And with the maximum — my mother’s love.”

But even his mother wondered about this little kid with his head up in the sky and so full of dreams.

“Oh, Juanito,” she used to exclaim, “you are talking to yourself again and putting all those words on paper! Something is wrong!”

Far from wrong. Juan Felipe Herrera grew into a beautiful voice that speaks out in ways both surprising, funny, poignant, and compelling — often in the same poem.

What follows is a slight transaction, a shimmer captured from the dazzle of Herrera’s bioluminescence. Herrera’s light filled the night with harmonica music, audience participation, call-and-response poems, serious readings, and insightful asides.

It was a spontaneous combustion of art and entertainment, with a little tent revival thrown in for good measure. The words are mostly Herrera’s.  He eats and breaths the poetic muse. I only rearranged a few:

YOU HAVE A BEAUTIFUL VOICE

Juan Filipe Herrera accompanies his poetry with a few riffs on the harmonica.

Sucking blood from the people.

The migrants travel norte on a vision

On a Dream, a dream in their lives

For better lives. They leave

Now the big train is refitted, makes it harder

To Climb on and jump off.

What kind of kindness is that?

No kindness at all.

It is an idea whose time has passed.

The King of Questions asks his “toppler,”

The one that is supposed to go for the heart.

But first, he oils the knife with kindness.

Yes, Larry, we have people,

Inside what you say, is there a question?

You call them illegals.

Easier than “people with a dream in their lives?”

Helplessness is a good thing

To feel. I want to be in reality

I want to feel what our brothers and sisters feel

And tell them ‘You’re on the right track.’

Our spirit will be tried.

Our possibilities will be limited.

But we can lift them all with three words.

It is a good thing, three words.

They take us toward many

Bombarded by all that takes place.

It is good to sing,

Good to sing into silence.

Slow the big machine down.

Slow the poetry down, too.

We’re not a silence culture.

Can’t you just cool down, man?

Trees. I’m thinking about the trees.

Plants and trees, they are our teachers.

Not the poetry teacher who says

A lot of syllables in here! You

Have to throw out some syllables.

That is your homework: Cut some syllables!”

A tree doesn’t do that.

A tree doesn’t throw the birds out.

A tree doesn’t require papers for the bird to build a nest.

“Hey, bird, get out! You’re stinking up my branches!”

Trees don’t do that.

A tree doesn’t do that.

Give yourselves some time.

Free your mind. Free your heart.

Let the trees teach you.

They give very little homework:

And the tree bends with the wind.

And that is enough.

Nature is our teacher. And what do we do with it?

Burn it down. Brazil. Australia. California.

You and the universe.

A conversation without talking.

Madeleine Thien kind of crushed my brain up

On Wednesday night talking about time.

The kind that stops wars.

Live your life as a poem.

Each time, a  reason why Mexicanos

Multiplication is our favorite sport

Someone made our IDs out of corn

The North is really the South.”

We’ve got this thing about walking out of everything.

To write that first bilingual poem is

Like discovering the color green for the first time.

A bilingual delight in reclaiming our bilingual selves.

It says, ‘Let us gather in a flourishing way,

You, Spanish and you, English.’

Let us gather in a flourishing way

With the trees of life in all four corners.

Let us gather for new beginnings

In the garden of our struggle

Amid the woven branches.

A blessing on the road.

I want to march with a poem

To bring the missing 43 with us.

To hug them, give them water.

I watch others standing up

Grief crossing their faces on TV, the number 43 painted on their cheeks.

Again, I want to march with a poem.

I’ve got to do something.

Maybe write three words on a piece of paper:

That is good enough.

Is that good enough?

Get beyond our own culture.

Would I go to the White House if invited?

If you would go.

We would have to go together.

To there over there. Us over “there”

Drop the baggage and show up.

At Patrick Henry Elementary School, not far from the gritty Mission District in San Francisco, Juan Felipe Herrera was the quiet little Spanish-speaking kid slouched down in the back of the classroom.

He might still be that kid,  if he didn’t have teachers who gave him interesting assignments like, “Move those sentences around — especially you, John!”

Herrera recalls fondly, “four or five teachers gave me lightning bolts … they helped move me on.”

One teacher called Herrera to the front of the room. “You have a beautiful voice, John. Sing something for us. Anything at all.”

Herrera struggled, terrified and tamped down because he was the Spanish kid. He thought. And thought.

How I wonder where you are.

“I think I almost made it to the end,” says Herrera.

“What mattered was that a teacher believed in me. A teacher said those five magical words, ‘You have a beautiful voice.’ And I was free. I began to be free.”

You are all writers, poets, artists, singers — and you all have beautiful voices.

Use your voices to say those five words to someone else. Make a difference. Nurture someone like a little bird in the tree, our teacher.

“You have a beautiful voice.”

One thought on “Poet Juan Felipe Herrera: Tell someone today, ‘You have a beautiful voice’”