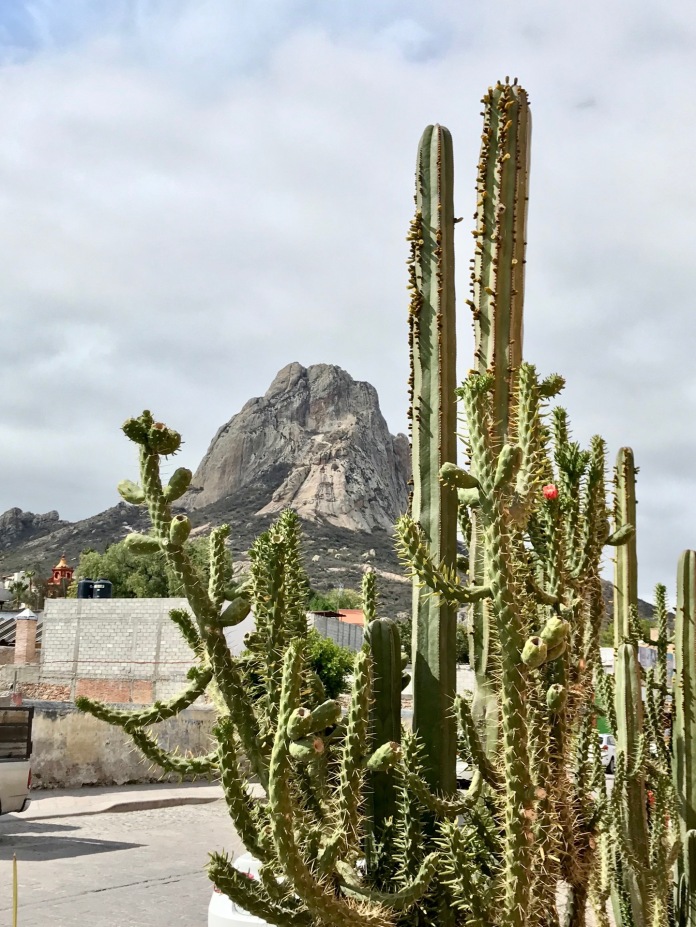 Peña de Bernal sticks out like a sore thumb. That’s part of the pleasure in photographing the monolith. From almost any vantage point you can take an awfully good photo. On the day we were there, the sky was mostly hazy overcast, great for photos and hiking.

Walking up the well-worn switchback trail of Peña de Bernal I had the oddest feeling that I’d been here before.

I hadn’t, of course. Which is why we were hiking this trail on Friday.

Obviously, this photo was taken before  Linda, Rose, and Gina climbed Peña de Bernal. Nobody was doing leg-kicks on the way down! Behind them is the sweets shop, a necessary stop after the hike for the restorative powers of chocolate and caramel.

Then it hit me, the trail up one of the world’s tallest monoliths is remarkably similar to the trail up Cowles Mountain in San Diego. That won’t mean anything to a lot of people but Cowles was practically at my back door in San Diego and my personal obsession to climb as often as possible.

In the end, I was running to the top and down — often dropping in a good hour of meditation on the edge of a cliff before the return trip. The rock was my health program, my sanity, and my social life. And I was a much younger man.

Some of the variety of trail conditions that take you up Peña de Bernal:

Bernal offers the same sort of well-worn trail — grooves in rocks made from thousands of boots and sneakers. Even the semi-arid scrub-brush vegetation is similar.

The big difference, of course, is that I was huffing and puffing up Bernal — but the feeling of jubilation at reaching the end of the trail was ever the same.

Peña de Bernal is less than an hour by bus from Queretaro — or if you have an Uber driver who experiences equipment failure and hasn’t a clue as to where the big rock sits, it could take you more than twice as long.

The restaurant of the hotel Centenario, Calle Aldama No. 6, Centro de Bernal, a most relaxing place for breakfast and waiting for lost friends to arrive …

Fortunately for us, our friends Jimmy, Gina, and Linda found a great little hotel and restaurant in Centro Bernal to hang out in, order some coffee and breakfast, and wait patiently for us to catch up — the Centenario.

It was the manager of the Centenario who pointed out that taking Uber to Bernal from our place in Queretaro was kind of overkill and burning up good money. He showed us a better way which I’ll get to in a bit.

The happy hikers, both before reaching Peña de Bernal and at the top. The five of us are in the far right picture, (l to r) me, Gina, Rose, Linda, and Jimmy. Jimmy looks especially happy because he has decided to stay at ground level and shoot photographs. Far-left photo:  Linda, Rose, and Gina at the top of the trail:

Peña de Bernal is, as its name indicates, a massive rock jutting 1,421-feet up out of the earth. By comparison, Cowles in San Diego is 1,593-feet high, but not composed of a single rock.)

It really is a stunning sight as you approach the town of San Sebastian Bernal which has grown up at its base. On a clear day, you can see the rock from the distant highway uncluttered by other mountain peaks. Peña de Bernal stands alone, aloof. It is like the rest of the mountains gave the monolith wide berth back in the formulation days, 8.7 million years ago.

The view of  San Sebastián Bernal from above. As you can see, it isn’t exactly a quaint little village.

A lot of people call San Sebastian “quaint” “and a “small village” but honestly it has a lot to offer and seems to be expanding at a rapid rate. The Centro is well-preserved and filled with shops offering among other things, warm clothing.

Yeah, on our way up to Bernal, we stocked up on ponchos, sweaters, and scarves. Baby, it was cold outside.

The peña is a pleasant 20 minutes or so out of town, up a fairly steep cobblestone road. People aren’t shy about taking a tuk-tuk up to the trailhead.

As for the trail, I’d call it reasonably challenging. A good pair of sneakers will get you to the top in about a half-hour. There are steps, footholds, well-worn stepping stones, and the occasional rail — and plenty of places to catch your breath while taking photos. 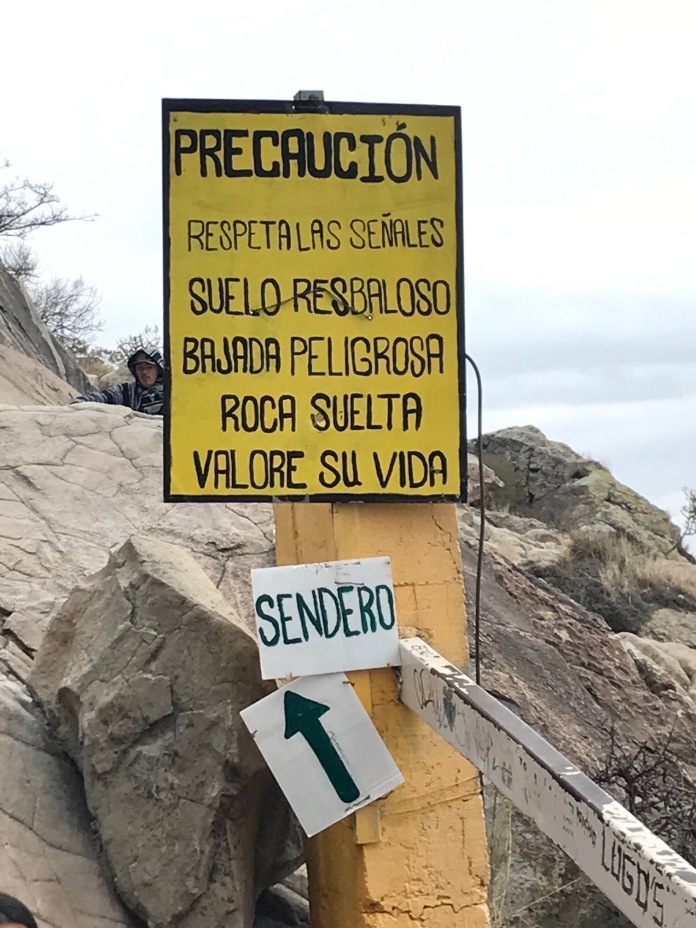 At what is the end of the trail, a sign in modified Haiku, kindly warns those who press on:
Respect the signs
Slippery floor
Dangerous descent
Loose rock
Value your life

As for the trail, I’d call it reasonably challenging. A good pair of sneakers will get you to the top in about a half-hour. There are steps, footholds, well-worn stepping stones, and the occasional rail — and plenty of places to catch your breath while taking photos.

Most of the way up, we traveled with a hearty pack of high schoolers who were having a blast taking photos, sprinting ahead, exploring side trails, and reaching the top while hardly breathing hard. 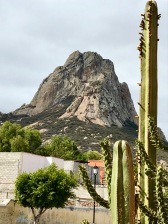 It that wasn’t humbling enough, up at the top we saw a lovely older couple quietly enjoying the view. He wore street shoes, a collared shirt, and a silky sweater and was carrying a briefcase. She was dressed in Sunday finery.

On the way down, we encountered a Montessori preschool class — little tiny kids tied three to a chaperone. They were scrambling up the hill!

In fact, watching people clamber up Bernal was as much fun as clambering up myself.

Ok, here’s what we learned.

Take the bus. Everywhere. We knew that already but we had no idea how easy it would be to San Sebastian Bernal. From San Miguel de Allende to Queretaro is a 90-minute bus ride. We took Primavera Plus, excellent buses and service. For two people with INAPAM (senior) cards, it was under 100 pesos.

Go directly to the Fletcher Amarilla or Fletcher Azul buses and pick up the next one to Bernal.  Only 29 pesos (with an INAPAM card) per person, and under an hour away. Both drop you off in town. And on the return trip, you simply wait at the curb. The last bus leaves for Queretaro at 6 p.m., we were told.

We stayed in Queretaro for a couple of days and explored the Centro district. Enjoyed a couple of great meals and it was fun walking around, though mighty cold.

Next time, I’d spend a couple of days in Bernal. There are enough intriguing restaurants, shops, and cantinas to keep you occupied and there’s a lot to be said for just sitting on a deck with a good book while staring up at Peña de Bernal and letting your mind drift away toward the peak.

On weekends, the mountain is lit up and there is a water show at the base. but we’re mid-week people whenever possible.

Though, I’ll take on Bernal any day.

One thought on “Road-trip: Feel the Bernal”