“Something wonderful is happening here,”  said Rodrigo Garciarroyo last night, after eight of Mexico’s finest young opera singers performed for more than two and a half hours before a very full house in St. Paul’s Church last night.

Producer and host Garciarroyo is a big man, in size and personality, and I don’t think he is given to understatement but then, we were all reaching for superlatives after this concert.

And all of us felt we were coming up a bit short. 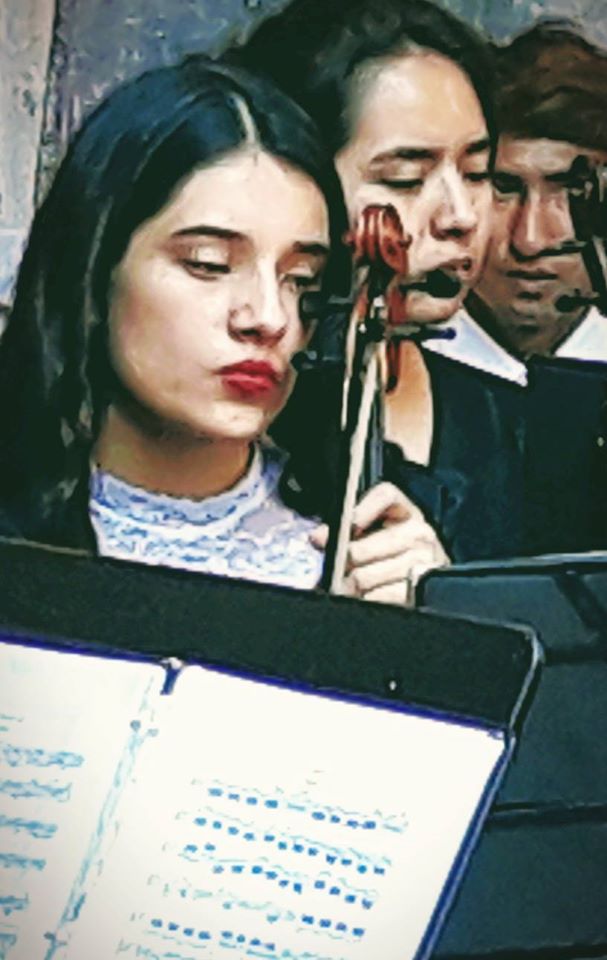 Last year, the day after the Met Opera finalists concert, the Pro Musica Youth Chamber Orchestra performed in the Bellas Artes courtyard. Another example of a growing cultural experience. This year the orchestra has added a sprinkling of professional musicians and moved the concerts inside to the more-professional upstairs theater at Bellas Artes. This image of a contemplative viola player was taken last year. One of my favorites.

This was clearly something special, a Mexico-defining moment.

This is the second year that the winners of the Metropolitan Opera’s Mexico-wide Opera Auditions have gifted San Miguel with a performance, under the auspices of the Pro Musica Concert Series.

A performance of a lifetime, for them and for us.

Seven singers took turns performing basically in the round, as the audience filled the pews and was packed right up against the altar.

Who could fault a little confusion? Even the program order was jettisoned toward the second half. Some arias were added. At least one singer subbed her winning performance for the one in the program. The order changed here and there. Many sang their winning numbers from Thursday.

But nobody minded a bit. Every performance was like opening the little blue box from Tiffany’s. Every singer was set to stun. And the audience was giddy with anticipation.

The grand piano of Mario Alberto Hernandez floated like an island in this sea of appreciative humanity.  And what a remarkable pianist he is! All through the auditions of the 45 singers who auditioned his music was their anchor, their lighthouse, their haven through at least two aria performances each.

Think of that one pianist for nearly all of the 90 pieces of music and 45 different performers. This in itself would be an astounding feat were it not overshadowed by the talent he has nurtured.

Last year, the finalist concert represented the first time that the Met had sanctioned auditions in Mexico as a unique region, although it had been trying to make something like this happen off and on for 20 years.

Even knowing the talent that has lurked in the open in Mexico, last year’s judges were so awed that they opted to choose five finalists and five Encouragement Award winners. Then the judges reached into their own pockets to help finance the additional singers.

Each winner receives $1,500 and the runner-ups win $500 each. Pro Musica pays a professional fee to each performer last night.

This year, new judges held the allotment to four winners and three runner-ups.

But they were apparently no less-awed.

One of the judges, Roberto Kalb, head of music for the St. Louis Opera Theater, was impressed. “I have judged in a number of districts for the Met,” he said, “and have heard more than 600 singers.

“One district, which I shall not name, had 38 singers. Later, the judges struggled to come up with one finalist. Here we have four. And last year, we had five from Mexico!”

This year’s two other judges were Melissa Wegner, director of auditions for the Met, and  Dr. Nino Sanikidze, head coach of the young artist program for the Los Angeles Opera.

It was the night of the sopranos.

The four finalists will move on to regional competition in New Orleans but first, they will adjourn to Universidad de las Americas Puebla where they will receive four days of intensive preparation in Mid-December.

Roberto Kalb said individual coaches are common in the United States but no district offers an entire package as does Mexico.

This recognition has been a long time coming.

Mexico has a robust classical music and operatic culture. It always has.

In San Miguel, Garciarroyo noted, live opera is entering its ninth consecutive season, and growing continuously.  Some of Sunday night’s performers will be seen in L’Elisir D’Amore by Donizetti in February at the Teatro Angela Peralta.

Getting recognition north of the border may not have always been a priority but now it feels almost like a vital counter-argument to the slanders coming from the American right.

Mexico is standing up tall for itself. Its artists continue to claim a fair share of the light on the global culture platform.

But now, it is no longer the individual who makes a name for his or herself — and the world notes that, by the way, they are from Mexico.

Now, the entire country is being recognized as a preeminent source for opera performers of the highest quality. Mexico is setting the standard.

As Roberto Kalb, himself a native of Mexico, observed last night, “This is a district everyone will want to watch in the future.”