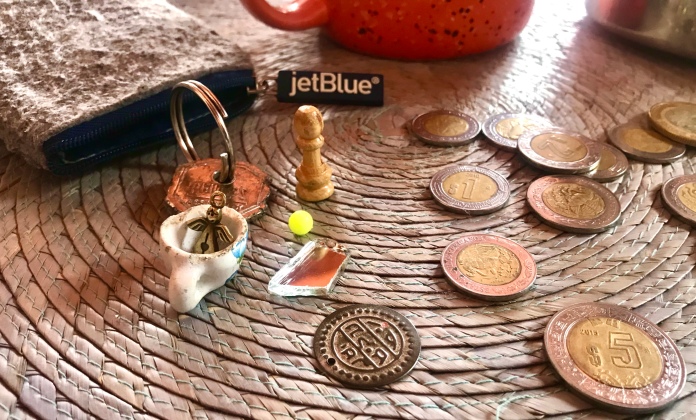 The current contents of the Cobblestone Museum pouch.

Welcome to Cobblestone Pocket Museum, the traveling collection of tiny found objects which may or may not have magical properties.

The museum is housed in a gray felt pouch big enough to hold one pair of sunglasses. It does not because sunglasses even if found would never qualify as “tiny.”

The bag has a zipper at one end and the rubber tab on the zipper says “Jet Blue,” which I used to fly whenever possible when the airline first launched.

I assume the bag once held a blindfold, earplugs, two aspirin, breath mints, and a little note saying, “Thank you for flying with Jet Blue. We value you as a customer.”

I’ll be even more honest. I’m not even sure if I got the pouch from Jet Blue.

I assume it is one of those things airlines hand out to First Class and Elite passengers and I rarely flew First Class.

I did fly up in the bubble of a 747 once, to London.  It was for work. They smiled at you, took your coat and hung it up, and kept pouring mimosas, and you ate off real china with real silverware.  I loved my job back then.

I think that was Pan Am. Their little comfort bag had stuff I used for years, like a portable coat hanger and a lint brush, and a very nice sleeping mask.

But we’re not here today to discuss airlines and how much they like some of their customers.

What is the genesis of the Cobblestone Museum?

It is a collection of tiny objects found mostly on the cobblestone streets of San Miguel de Allende. They may or may not contain magical properties.

That is not for me to decide. I am only the curator.

The museum began early one morning more than a year ago when I was walking Moppit, the noble philosopher dog.

I happened to glance down at my feet — a strategic, life-saving strategy when you walk on cobblestones a lot.

There, between two stones was a tiny blue and white teacup. It was dirty and had a few chips and scrapes. I was amazed that something so delicate could survive in such a place.

I immediately looked around for the owner, perhaps a small tree-fairy holding a nearly complete tea service on a silver tray.

No one fit that description. Not even remotely close.

So, I pocketed the cup and assumed that the rightful owner would know exactly how to reach me when the time is right.

Nobody called upon me, although a cat appeared on our third-floor patio and strolled through the house as if looking for something. This happened more than once. I know that cats are sometimes deputized by fairies, to interact with humans on their behalf.

This cat was rather aloof and did a poor job as an emissary, if that indeed was its purpose.

You could never accuse a tree-fairy of being careless so I assumed that something tragic must have occurred for a fairy to drop a teacup. Like a greedy developer chopping down trees to build houses, or a government cutting down trees to make more room for cars to drive to new houses.

I wrote about this, once on Facebook and once on my blog.

The story generated lots of readership and a few solicitous calls inquiring about my health but apparently, tree-fairies don’t read blogs or Facebook.

Well, good for them.

Still, I am left with this teacup. I put it in the gray felt pouch for safekeeping. The pouch is almost always at the bottom of the backpack I lug around every day. Coincidentally I keep spare change in the pouch as well.

Over time, other items have joined the teacup.

All of them have been found on the streets of San Miguel when I wasn’t looking for them.

May you always find an angel in your teacup

Take the most recent, which I found today on Orizaba. (Technically not a cobblestone street. More of a flagstone street.)

It is a tiny brass angel. So tiny that it fits comfortably inside the tree fairy’s teacup.

I haven’t much to say about it, except that anyone who finds an angel is very lucky indeed. I am humbled to take on caretaker responsibilities.

I already have seven angels sitting on my shoulder, a gift from a friend more than a decade ago. I wrote their names on a torn piece of yellow paper which I keep folded in my wallet. I pull the paper out and call upon these angels when I feel the need for guidance.

This new angel is smiling. That is always a good sign. On the angel’s back is inscribed “Eres un angel” —  You are an angel.

I hope the previous owner read that message every day.

Another item in the museum is a small wooden pawn from a miniature chess set. I found this on La Esperanza or Calle San Jorge in Colonia San Antonio.

The pawn and teacup have a few things in common.

Both are very small and delicate and thus fortunate to have survived in the cobblestones. Both are key components of a larger set of objects: a chessboard and a tea service, respectively.

What does it mean to find a single chess piece?

Excellent question. I have pondered that often.

And I don’t know.

I did find a post on a discussion board titled “Metaphors in Chess.” The author posed this question: “If the chess pieces could each teach us a lesson, what would they teach us?”

Here are some of the responses for the pawn:

In Medieval times, pawns were given the names of ordinary occupations, to give them distinguishing characteristics. Each pawn had a unique identity — such as innkeeper, blacksmith, weaver, foot soldier, and laborer.

Giving identity to pawns is anathema in our industrial and post-industrial society. The point is to strip all identity away from workers. Otherwise, you have things like unions, and worker rights, and self-determination, progressive politics, and group participation in decisions.

So, you can see why all pawns look alike these days.

Mine is a good pawn for today and it reminds me to fight for who I am.

“The pawn is the soul of chess. … the Pawns. They are the very Life of the Game. They alone form the Attack and the Defense; on their good or bad Situation depends the Gain or Loss of the Party.”       — François-André Danican Philidor, 1749.

Remember the humblest of white pawns, Alice. She stepped through the looking glass, engaged the world, and rose to be a queen.

Mirror, mirror, on the wall …

There is a small shard of mirror in our museum.

As you walk around San Miguel, you may notice hundreds of tiny mirror pieces in the streets, in certain parts of town. They certainly brighten your walk, providing you are wearing shoes.

But did you know that long, long ago, those mirrors were whole and were everywhere in San Miguel?

Some of the more dramatic mirrors began to think of themselves as the very reason that San Miguel existed. They fought hard for the name “San Miguel, ciudad de los espejos.”

The mirrors were miffed when that failed to happen.

Some mirrors were miffed.

Mostly the ones in elegant frames, that hung in places of honor in very large houses.

“Look at the cobblestone streets,” they said. “That is all that people seem to talk about.”

The mirrors hatched a plan.

They would take the streets away from the cobblestones and pave them with mirrors.

Soon San Miguel would be known as “the city of mirrored streets.”

The elegant mirrors gathered together the medicine cabinets, the dance studio mirrors, the clothes-closet door mirrors, the ones that sit on dressing tables, and the very inexpensive ones that often give people a warped impression of themselves.

This was the army that the elegant mirrors would use to conquer the cobblestones.

Well, as you know, that ended badly.

There was a terrible battle. Mirror after mirror flung itself upon the cobblestones while the gilt-edged mirrors cheered them on from their safe perches above fireplaces and in elegant hallways.

What you see today are the scattered remnants of that battle.

When I look at the little shard in my museum, a few things come to mind:

Years later, the beer bottles tried to rise up against the cobblestone streets, but every time they gathered in large enough numbers they ended up singing old songs and arguing amongst themselves.

Occasionally one or two would fling themselves at the streets, but it never ended well.

There are other items in the pocket museum, whose purpose has not yet been revealed to me.

A tiny little iridescent ball, for example. And a circular key ring with half a key — very badly battered key in need of love. And a coin-like bangle that, if I understand the genesis correctly, came off the costume of a belly dancer.

But that is a story for another day.

There was a little gold anchor in the collection but it is gone now.

I suppose that is the danger in combining spare change in the same pouch as a museum.

Well, that is the current extent of my museum.

I don’t seek them out.  If you look, you will not find.

And I don’t require that they stay. Though I’m always grateful when they impart some sort of lesson, a bit of magic, or the simple pleasure of a brief acquaintance.