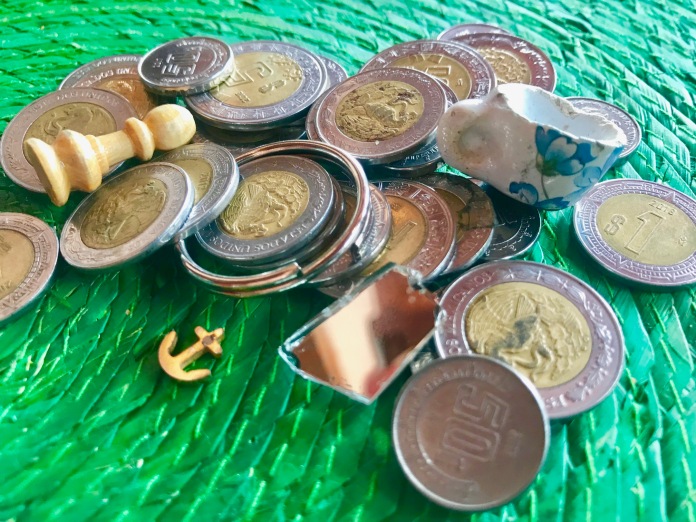 Since finding the teacup, the cobblestones have yielded other treasures — an anchor from a small fairy boat, a tiny pawn which may have been used as a coat rack, and the remnant of a fairy’s full-length mirror. They all stay in my change purse, should their owners ever wish to reclaim them.

There is an old tradition, which I am just now making up, that says when you find a fairy’s unbroken teacup on a cobblestone street, good luck will follow you around — as long as the cup remains intact.

For you see, anything that survives unbroken on a cobblestone street must be very, very lucky, indeed.

The fairies live in the oldest trees of San Miguel de Allende. When the trees are cut down to make way for more buildings, the fairies must flee and take with them the good luck, kind feelings, and benevolent outlook which they share with the city.

And the few possessions they can salvage ahead of the developers.

Have you ever heard the cries of a fairy family when its home has been chopped down?

No? You don’t want to. The sound would burn your soul, if you have one.

Which explains how some people can cut down ancient trees and not feel a thing about it. 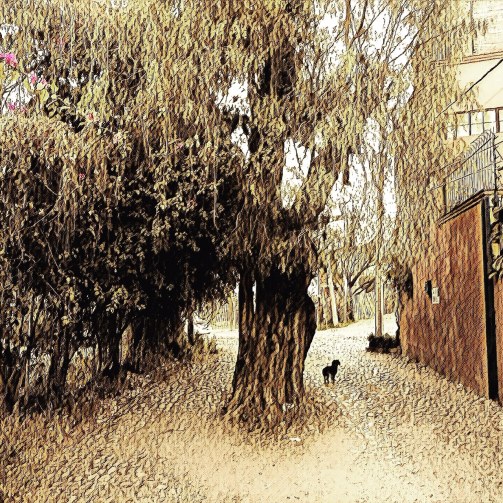 You can still find gnarled old trees (and sadly, trunks of trees) with little doors and windows — homes of the fairies. When you see a tree still growing in the middle of a cobblestone street, you know that the fairy magic surrounding it is strong.

This teacup was nestled between several cobblestones on Refugio Sur, around the corner from our house.

If you know the fairy who lost it, contact me and I will gladly return it to the owner. The cup looks like they might have been together for hundreds of years.

The coins used in this presentation were later donated to talented street musicians and old ladies with one hand outstretched and veils over their faces.

“I have the fairy’s teacup,” I whispered to each, for the street people are our best contacts with the fairy world. 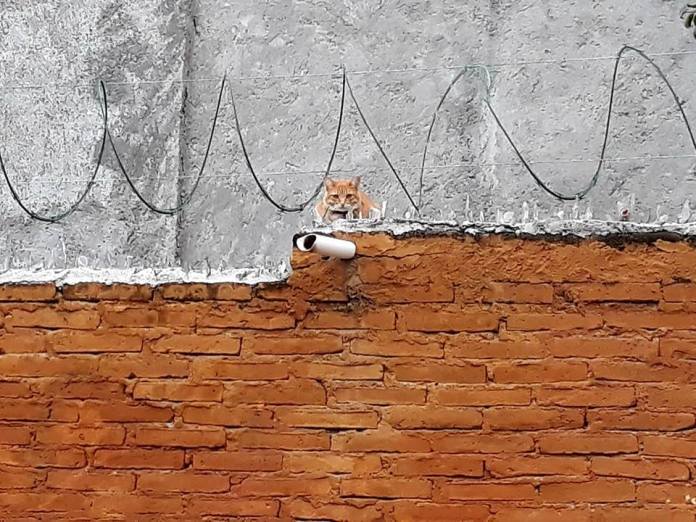 This cat in San Antonio is known to stand vigil over the dwindling number of fairies remaining in the neighborhood.  She is an emissary, ready to serve fairy needs and act as a go-between for fairies and humans.

While I was composing this story, one of the fairies’ emissaries, an all-gray cat,  wandered into our apartment and made a big deal of inspecting things.  The cat went from room to room, looking up and down, and completely ignored me.

Mind you, we live on the third floor. I’m not sure if cat emissaries can fly or if the fairies used their magic to lift her up this high.

If you know the fairy who lost this teacup, tell him or her that it is safe and they can claim it any time. And no need to exchange it for a pouch of gold dust. I never liked that tradition. One’s teacup is not something to be bartered over.

Request for photo of fairies 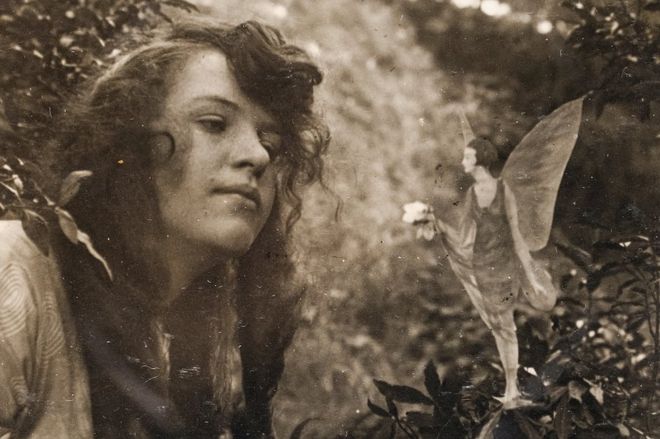 In 1917, the 16-year-old Elsie Wright (above) and her nine-year-old cousin Frances Griffiths used fairy cut-outs and hatpins to create some fanciful images with her father’s camera. They took the photos in the woods by the village of Cottingley, near Bingley in Yorkshire.
The hoax fooled many people including Sherlock Holmes author Sir Arthur Conan Doyle.

Have you ever photographed a fairy in flight? It is a beautiful thing to see but so hard to capture on film. Fortunately, the memory stays with you, making a photograph mostly unnecessary.

As you can imagine, fairies are extremely shy.

Recently, one drifted by as I stood looking out over San Miguel from the rooftop deck one evening at dusk. It was a conical bit of fluff and light with the airiness of a feather.

As I reached for my camera, the fairy did a gentle loop-de-loop and then veered off to the right and disappeared off toward the Jardin in Centro.

It was gone before I could snap a photo. Usually, people only get a pice of a wing or a foot on the edge of a photo. Rarely do you see a whole fairy in a frame. That would be an amazing picture indeed.

Artists try very hard to capture images of fairies on canvas. Sometimes, I think, fairies play with the imagination of artists and plant very silly images in their minds.

I’m not sure but, at the bottom of the picture above, those might be the feet and legs of the very stout fairy who served us tea …

The tree fairies invited me over for tea. Fortunately, I always have this fairy-sized teacup on me for just such an occasion.

“Did you lose a cup, perhaps? I found this one nestled among the cobblestones on our street,” I said to my host.

“That is very kind,” he said, “but as you can see, our china has a very different pattern and our set is quite complete.”

“Do you recognize this pattern?” I asked. “I do not seek three wishes or a packet of gold for returning it. I just feel a teacup should never be very far from its owner and I fear this one has strayed very very far.”

“Sadly,” said my host, “so many of our kind have been forced from the city as more and more houses get built. It was probably dropped as a fairy was fleeing in haste from a falling tree.

“Things get lost, you know, when you act in haste. Though, some times you can’t help yourself.”

My host was quite old and spoke of a time when there were more trees than people — and thus more fairies — in San Miguel.

“We shared magic back and forth as if it were pure water flowing from the ground. The magic became art and beauty to be shared with everyone”

He continued, “What I miss most is the whimsy. Every time a fairy clan is driven from an old -soul tree, a piece of whimsy seems to disappear.

“The saddest thing, though, is how commerce rushes in to fill the void. I miss the whimsy.”

The tea, though, was delicious and brightened our outlook, as tea always seems to do.

All and all, a lovely visit.

The webs are hung from this tree so that late in the afternoon they can attract the sun’s golden rays.

Fairies have been harvesting gold in this manner, from this very tree, for centuries. In the distant past — pre-Spanish times, at least — the fairies gave the gold to indigenous peoples so they could make beautiful things with it.

Nobody knows what they do with the gold now. People see the delicate strands of gold but know it can be harvested only by the purest of hearts.

Since the invention of television, only the fairies — and some very young children — have been able to gather the golden strands.

Protectors of the fairies 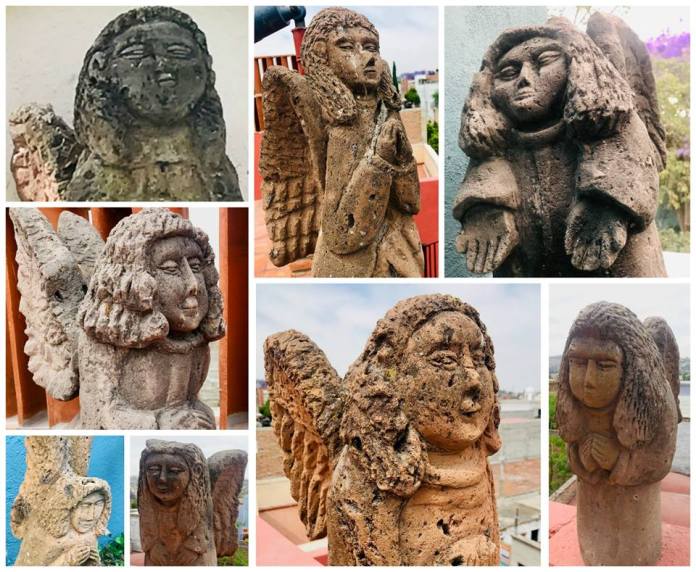 I have heard that the many stone angels found around San Miguel aren’t really made of stone at all. They are just very vigilant. Their job is to protect the fairies from unexpected calamities — like greedy humans.

Because they can fly higher and farther than fairies,  the angels often are called upon to seek new homes when the city and developers cut down the ancient trees.

As you can see from these angels, they have been at this sort of thing for a very very long time. They are getting on in centuries and don’t fly as high and far as they once did.

Still, the migration of fairies to the countryside continues.

Which is a tragic thing.

When they go, they must take whimsy, joyfulness, creativity, imagination, and curiosity with them. And that is a lot to carry.

So it is easy to see how a fairy fleeing an ancient tree in haste, just ahead of a developer’s saw, might drop a teacup onto the cobblestones. 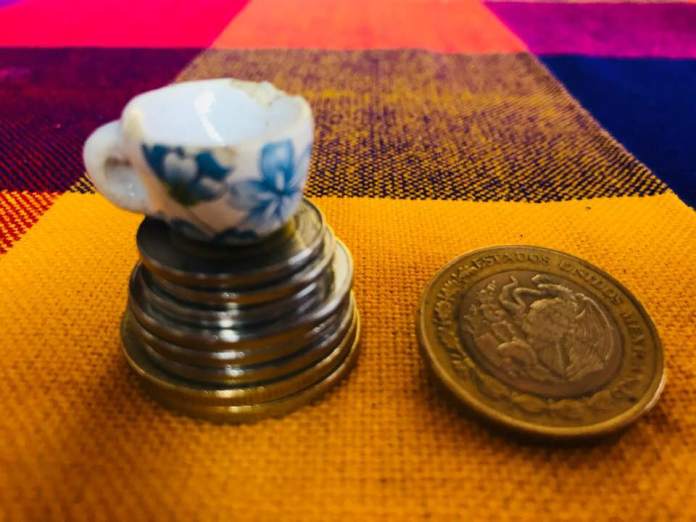 4 thoughts on “The fairy’s teacup”