The Umbrellas of Cherbourg hover above the courtyard at Paprika Restaurante.

So often we zip into Paprika Restaurante, catch a concert in the back or check for mail upfront. Then zip out again. Rarely do we slow down to appreciate the many layers of beauty which make up the interior space.

Tuesday, we were fortunate to attend a concert by violinist/composer David Mendoza and pianist Lorelei Capell in the Paprika courtyard. We found ourselves there a little early, which in itself, was a gift. 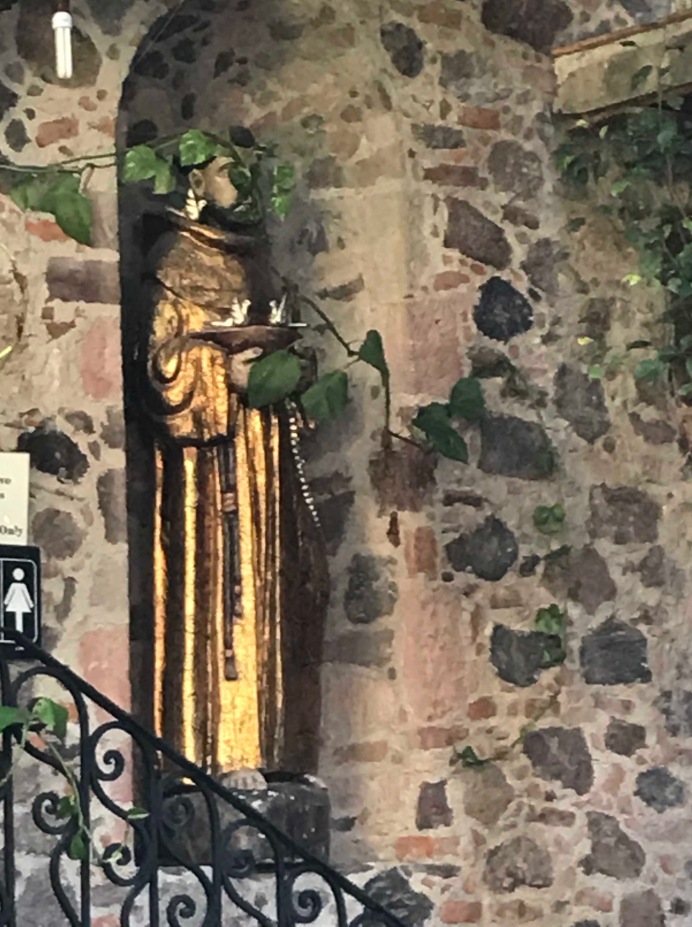 Stepping off the busy Ancha de San Antonio and into the courtyard is like stepping back in time, to something like 17th century Spain. Or, maybe a movie set.

Every corner, every niche, invites inspection. The eye flits over statues, cornices, carvings, flora, several layers of living space soaring into the sky above, and umbrellas.

Yes, a row of colorful umbrellas. They like artifacts from the French musical “The Umbrellas of Cherbourg” and convey a whimsical air to the setting from above. 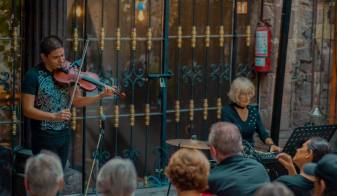 As for the concert, there is none better to enhance the setting. David Mendoza has returned to San Miguel de Allende after an absence that was felt by many. He doesn’t just play the violin, he inhabits every note and imbues the music with an intoxicating joyfulness. You should see how people smile when he puts bow to strings. You can’t help it.

Lorelei Capell is the perfect complement to David’s flights of passion. Together they performed a set of deeply moving songs, mostly from classic movies. The set contained a fair number of compositions from Ennio Morricone, including from “Cinema Paradiso,” and one from Yann Tiersen’s soundtrack for “Amelie.”

“It is going to be a very romantic evening,”  Lorelei had said the day before. How right she was!

David went solo for the second half with his own compositions using drum tracks, sound loops, and reverb to augment his meditative and dreamlike music. He gently painted on layer upon layer of sound until a near orchestral density pulled at the heart.

With an uncanny sense of timing, the concert ended minutes before the skies opened and evening showers arrived.

David Mendoza performs in concert next on 25th September at Miguel Malo hall,  in the Bellas Artes. You can sometimes catch him around town, sitting in with other fine musicians, like Media Luna which performs Sundays at Paprika.