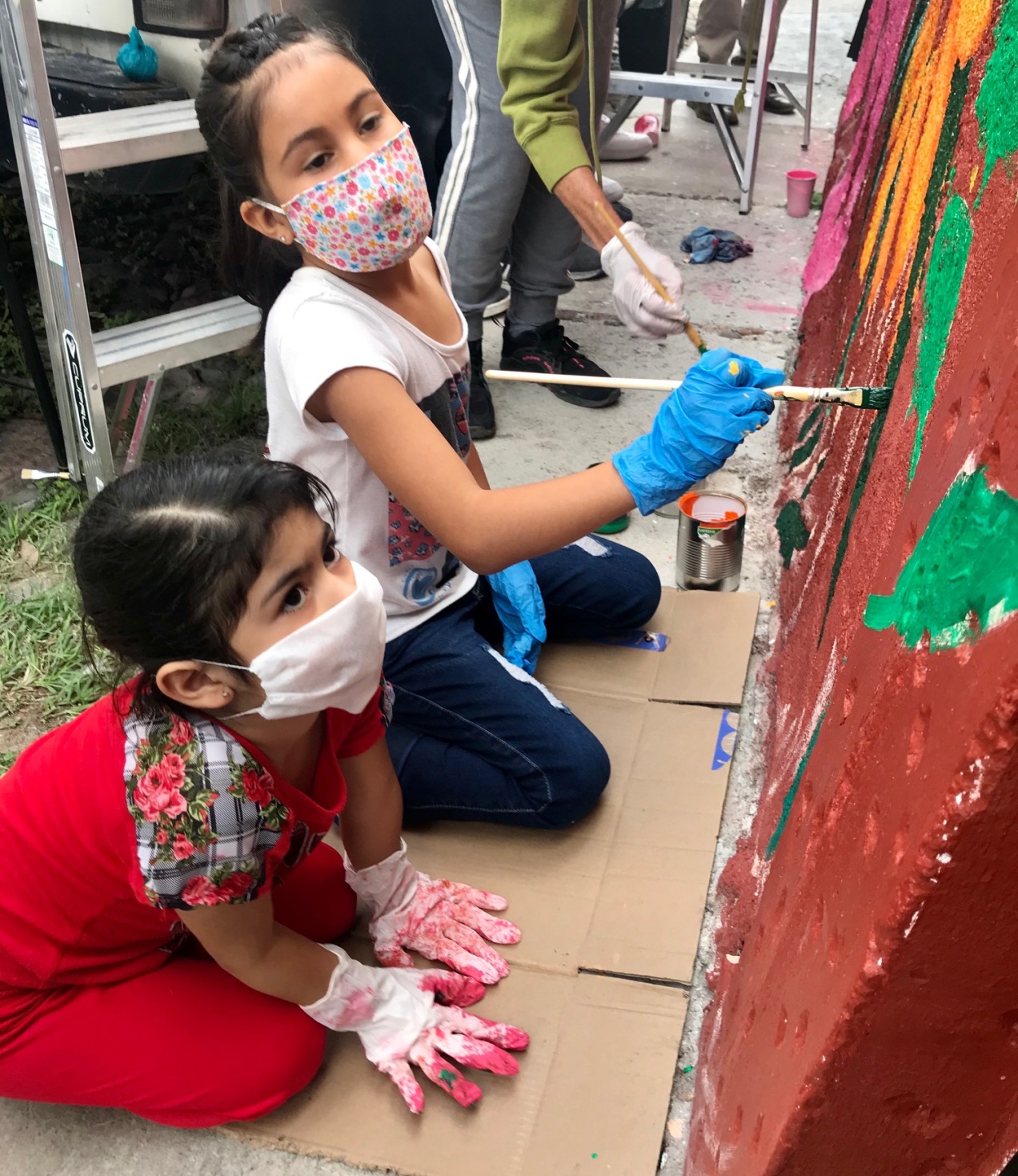 This is how things work in magical San Miguel de Allende:

Susan Campbell Skinner lives on the corner of Refugio and  Orizaba in Colonia San Antonio.  Across the street is Dona Rosa’s tienda where she buys organic eggs, produce, and fresh squeezed orange juice.

Susan does not know Rosa well but she feels a kindred spirit. She feels like Rosa is always looking out for her and her casa when she is away. This is what neighbors do for each other here in San Miguel de Allende.

So, Susan wanted to do something nice for her neighbor.

She contacted Efrain Gonzalez, an artist, muralist, friend, and all-round mover and shaker in the community. They decided to freshen up Rosa’s hand-painted sign and add a modest mural on the corner of the building.

Efrain started to paint a bicycle with front and back baskets and pretty soon, some of the neighborhood kids joined in and under his guidance added flowers to the bike’s baskets.

Refugio and Orizaba is what you call a high-visibility intersection. Before this little project was completed, numerous offers came in for Efrai’s services. (For example, Efrain can do a pretty spectacular Our Lady of Guadalupe mural on a wall.)

The bicycle also caught the attention of some people in the San Miguel government — the ones who sponsored murals of Frida Kahlo, Mona Lisa, Van Gogh, and others wearing masks — and they are interested in working with Efrain on some projects, especially incorporating the energies and talents of the kids.

Meanwhile, Susan Skinner had a balcony seat on the magic that the bicycle mural was spinning.

“Everyone stops to look at the bicycle,” she said. “They pose for pictures, pretend to put their hands on the seat and handlebars. It brings so much happiness. Something is happening here.”

Jesus Gonzalez and Olga Huerta live a block north of the intersection and the bicycle mural caught their attention. They liked the idea of a mural on the front of their home and tienda at Refugio Norte 55.

So Susan Skinner, the one-time judge from Texas and Efrain Gonzalez, the one-time gang leader from California, have joined forces to make murals with community participation.

Work began on Refugio Norte 55 this morning with more than a dozen neighbors, friends, kids and their families showing up to splatter paint in all the right places. Efrain, Susan, Jesus, and Olga settled on a giant burst of flowers that will soar upward from the ground.

Efrain sketched out the base design across the face of the building and then kids and adults began filling in the pink, red, yellow flowers and stems and leaves in all shades of green.

Tall ladders will soon arrive to extend the mural toward the sky. On Sunday Efrain and his new assistant/apprentice, Derick, will return to add the finishing touches. In a mere two days, they and their community friends will have magically transformed one little corner of this San Antonio neighborhood.

“We are trying to bring unity and love amongst the community and empower the young ones,” said Efrain.  “The designs for the mural work we are choosing have to depict a sense of happiness and bring smiles to people’s faces when they see the art displayed.”

Efrain started the day with a mini-workshop in safe-distancing, face-masks, and hand sanitizers — both of which were on hand for volunteers. Mothers on the street were preparing sopas and providing water for lunch for the volunteers, too.

As the mural grows, more photos will be added to this page. So check back and watch as the flowers bloom and transform the neighborhood.

Meanwhile, check out the photos of the many friends of the mural on Efrain Gonzalez’s Facebook page!

4 thoughts on “One thing leads to another: A mural grows in Colonia San Antonio”