Well, this is the inspiration for M.C. Escher-cise — and it kind of looks like our house. Kind of. But you can see the concept and how it might work, right? Except for the optical illusions. Escher’s houses have lots of optical illusions — like infinite staircases — and mine sort of doesn’t.

You know, stuck here inside as we are, during these days of self-isolation, I’ve been giving a lot of thought to exercise.

A lot of thought.

You might say, thinking about exercise is inescapable. Seriously, I can’t get away from it.

Everywhere I look, there is Rose … exercising. She takes long walks or runs just before sunrise. She comes home and rolls out her yoga mat for one, two, even three different sessions with cream-and-sugar-voiced online instructors.

M.C. Escher didn’t exactly invent the exercise treadmill but he sort of anticipated the feeling we all get after about a half-hour or so — especially when you don’t have a television set in front of you. Escher made no known statement on television and its value as an optical illusion.

If nothing else is pending in the afternoon, she might take another dose of cosmic body-bending instruction from some slender young thing with a vaguely British accent and a Germanic sense of discipline.

Mind you, this is her profession. So, yes, well done, Rose. I support you to the fullest.

I am a realist. I get it that we can’t squeeze two people on to one yoga mat. And so I defer to the one of us with the stronger motivation.

But the realist in me also says that something needs to be done before the quarantine is lifted. I don’t want to be the only person on earth who emerges from the Dark Ages with a beastly rotund gut and but, t while crying to the wind, “Bigger pants! I need bigger pants!”

Not me, brother. No sir.

So with an expanding behind in mind, I have set about designing my own regimen: M.C. Escher-cise.

A second inspiration for M.C. Escher-cise. This one not only defies reality,  it defies gravity as well. With M.C. Escher-cise, you need only defy your impulse to go back to bed and pull the covers over your head until the plague has passed.

I began with the simplest of questions: What resources do we have in this house that I can make use of in my new exercise program?

The first thing that I discounted was the presence of a really excellent yoga/pilates instructor.

After an hour or 90 minutes of intense instruction, let’s say four times a week, would you really want to go home with your exercise coach? And I am talking in the most platonic sense imaginable.

Of course, you wouldn’t.

In a word, staircases.

This house is blessed with staircases and stairwells, in a variety of shapes and materials. We have a metal spiral staircase and the three-story central stairwell and a two-story back staircase to the garden. There are five in all.

I have devised a path that takes me from staircase to stairwell to steps — and back again. Up and down, over and around — over and over and over.

In total there are 177 steps to climb and descend and 108 flat-ground steps to connect them all, for a total of 285 steps in each circuit — going absolutely nowhere and back again.

All in the name of good health.

My exercise route — more or less: 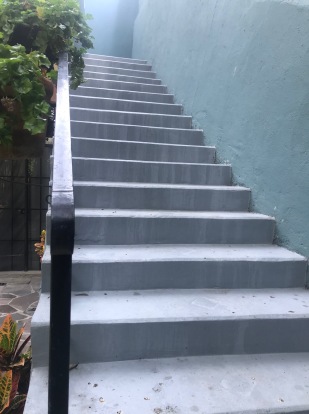 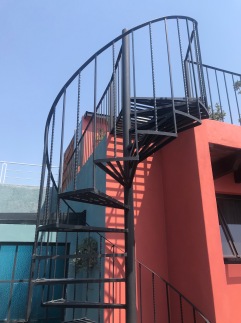 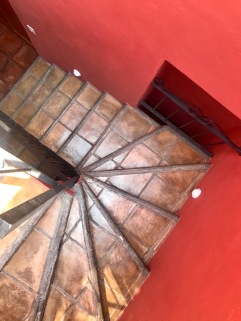 No less an authority than the National Institute for Health, from back when it had fewer crises on its hands, says that bench-stepping has proven value.

I know what you are thinking and the answer is, I couldn’t find any bench/stepping studies involving men. Frankly, I think climbing steps as exercise is a tough concept for many men to grasp.

Admittedly, I have been blessed with an unusual number of staircases. But I believe M.C. Escher-cise can be applied to single staircase households as well.

A word of caution: Think twice if the staircase is in a multi-unit building. Think three times if your current sedentary behavior is already driving your partner/spouse crazy.

I’m thinking 20 minutes of steady climbing and descending is a good start. My goal is to increase the time to a full hour or until I perceive that all-important warning sign: “Jesus! Enough already!”

Or … hmm. That’s Wednesday, so maybe start on the first of the week. …

But, you know, it is already almost June, so … it would be great to start on the first of the month. As long as it falls on a Sunday …

3 thoughts on “Time to step up and raise at-home fitness training to new levels with M.C. Escher-cise”