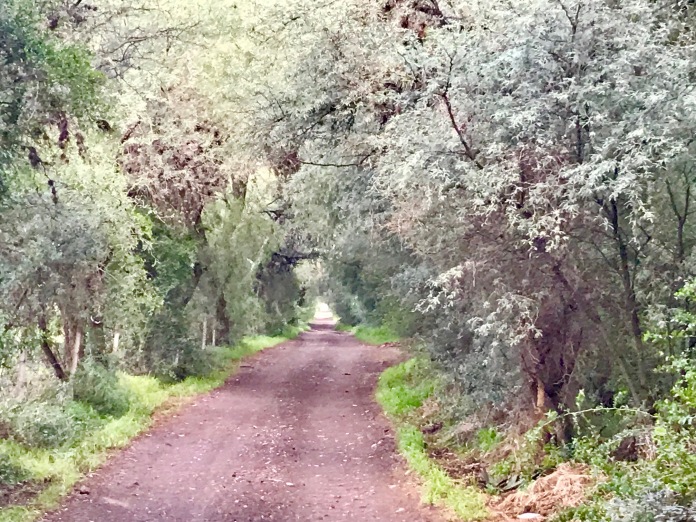 All it takes is to miss a turn and you end up on a quiet country road like this one, which leads to the long-ago abandoned hacienda Las Trancas, about midway into the first section of the trail and a fabulous spot from which to engage the river.

We did it! We found the off-road, Rio Laja trail from San Miguel de Allende to Antotonilco. Several weeks ago, when we walked to Antotonilco along the old highway it was pleasant enough but the road is narrow and pretty busy.

Here and there we’d catch glimpses of the chalky gray Rio Laja which flows south into the sprawling reservoir called La Pressa Allende. And here and there was evidence of a trail!

We’re still new at this hiking/walking thing and lacked the confidence to jump off the road and into the brush along a river we hardly knew. Who knew where we might end up?

Discovering an off-road path to Antotonilco felt like hunting for the Northwest Passage or a new trade route to the Indian spice markets or, well, just a safer way of walking a reasonable distance on a beautiful morning in central Mexico.

Still quite new to San Miguel, I suspect that there are hundreds of walkable paths crisscrossing the region like the webbing of a spider. I know there is a Sunday morning hiking group that wanders far afield (in a purposeful way) and comes back with wondrous pictures of bucolic and undisturbed countrysides.

I reached out to one of the leaders, Rickey Flynn Wendling, and he really came through.

Rickey sent a link to an Audubon de Mexico page for the Rio Laja Trail, which actually extends from the top of Pressa Allende to Dolores Hidalgo, 32.43 miles (51.9 kilometers) away.

The Rio Laja page breaks the trail up into 12 sections, the first four of which will get you to Antotonilco. Most importantly, the trail guide includes printable descriptions of each section (loaded with GPS coordinates if you know how to use that sort of thing) and maps from the AllTrails.com website. More than 30 volunteers compiled the descriptions, maps, and photographs. 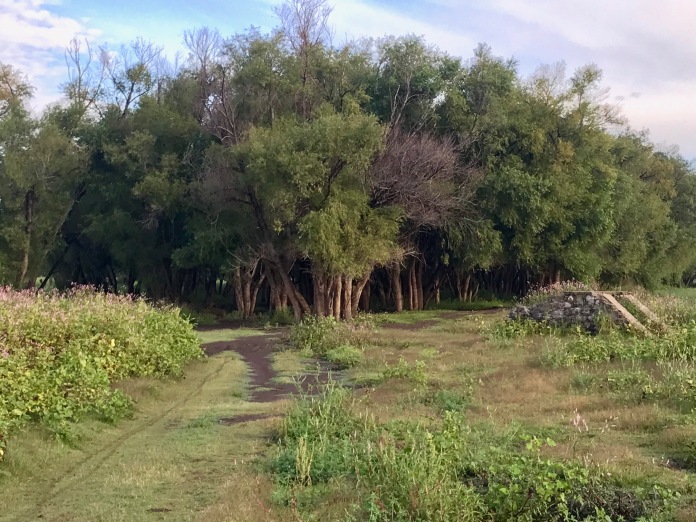 A trail made for Robert Frost: “Two roads diverged in a yellow wood.” The choice was pretty easy. To the left, the trail was filled with water. To the right, a fresh pair of mountain bike tracks (you can see them at the left before cutting sharply to the right.) lead the way. This was adjacent to the old hacienda Las Trancas.

There are two times to set out on this trail: rainy season and non-rainy season. One might be better than the other.

This, of course, being rainy season you can imagine some of the challenges of following a river trail. We encountered all of them.

The first is that the trailhead at the Presa is underwater, but there are numerous other points of entry.  Also, rivers being rivers and vegetation being vegetation, it sometimes felt like we were breaking new trails.

Early on, while still far from the river, we ran into a section of muddy road that was completely underwater. Trying to tiptoe over slippery mounds of mud on the side was pointless, and messy, as trucks and motorcycles slogging through sprayed the sidelines with that gray clay mud.

At the apex of this crisis in hiking, there appeared a man, walking in the field on the other side of the barbed wire fence. He chuckled and said something perhaps, “The road is for fishes, my friends. Come over here.” He helped us over the fence and we followed him up a hundred yards or so to where the road was well-drained. Once over the fence, he moved on with a cheerful smile and wave, and a “Buon dia!” In our expat lives, there are many such “magical Mexicans,” angels who appear in our lives here at just the right moment of need.

Since it poured buckets the night before, we carried much of the trail on our shoes in the form of sticky mud and slippery clay from the cornfields and woodland paths. And the rising river made crossing impossible to perilous, which I suspect means we missed out on some choice segments of the trail. 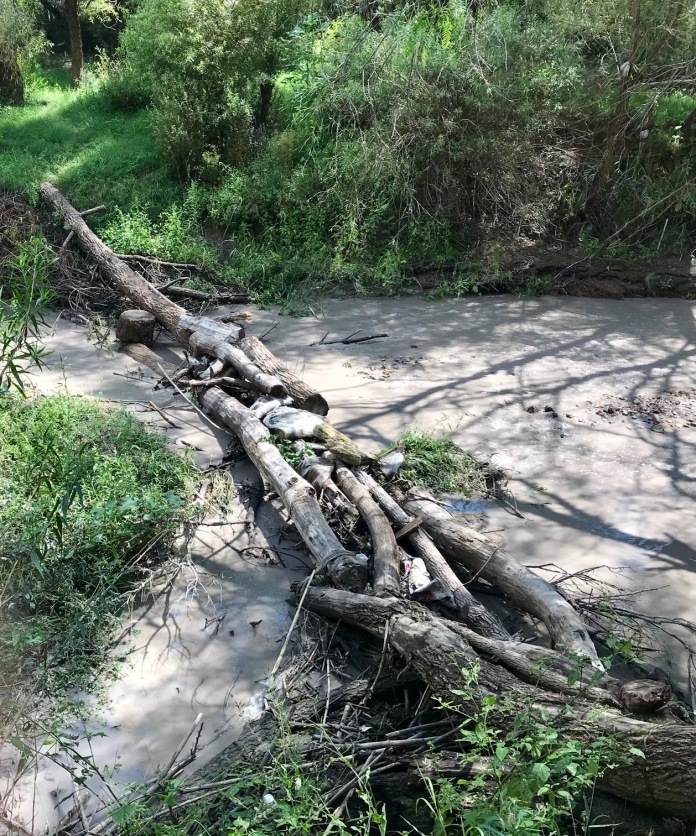 This is a bridge. It was the only non-standard construction bridge we could find on the river but we had to cross it to reach the path. That concrete gray mass around it is really the fast-flowing Rio Laja. Clay fields and construction infuse the river with runoff that murks it up.

One crossing we made, of which I’m especially proud, was over a rickety pile of logs and stumps and planks all held together with someone else’s barb-wire fencing. (There is a picture just above. Imagine traversing with all the imbalance of a drunkard and shoe bottoms encrusted with clay.) At another crossing, one of us fell a foot short of dry land during an otherwise balletic leap from sandbar to shore.

Growth is at its finest during the rainy season and that means challenges, especially where the reedy carrizo grows with the attitude of kudzu and density of bamboo. But that rain gave us spectacular fields of green and a giddy abundance of petrichor, that “pleasant smell that frequently accompanies the first rain after a long period of warm, dry weather.” (Thank you for that word, Bob Cooksey. I got to use it at last!)

The Rio Laja Trail in one of its finest moments. This could be an amble down an English country lane or a trek through Napa Valley.

And sometimes it felt like we were walking in the English countryside on ancient and genteel paths carved over centuries,  or what I imagine they might feel like since I have ambled down only a few overly domesticated trails in East Sussex. We waded through sheep herds and marveled at a dead tree trimmed with snowy egrets and were stunned by fields abundant with wildflowers, songbirds, and butterflies.

The entire stretch of the river we were gifted with the sight of cranes, snow egrets, ducks, and other waterfowl which would launch into the air just ahead of us, screeching their annoyance at our intrusion.

We fell short of following the river the whole way to Antotonilco. About a mile south of the town we completely lost track of the trail. We climbed up a steep boulder embankment to a new section of road and entered the town on sidewalks, still feeling victorious for our efforts.

The river trail is no shortcut. Its sinewy path adds a couple of miles and the ever-changing terrain — and the splendorous beauty of it all which forces you to stop and admire — added nearly two hours. I’ve never been more exhausted. I could barely lift my artisanal black porter at Coyote Flaco.

But every step and every minute was worth it.

Some more photos below, which I’ll do my best to keep in some sort of order:

A familiar morning sight on the Road to San Miguel El Viejo and the Otomi Resort. We followed the road a short way, to the first turnoff. We live in a city and this is barely a mile’s walk away.

Who’s a happy girl? Rose dances down the road that eventually leads to an abandoned hacienda and the Rio Laja.

The hacienda road breaks out of the ancient tree canopy and into low fields of purple and gold. This could have been old cranberry bogs on Cape Cod, but it is just north of the Presa Allende.

At some points, the path is immaculately maintained, like this section which finally took us to the edge of the Rio Laja.

Old tree stands are common along the river as a barely visible trail splits the distance between trees and fields. 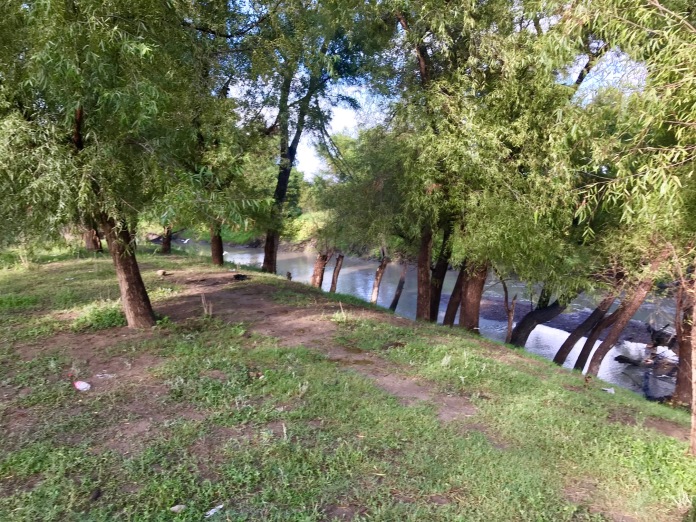 The river at last. So much of the trail is canopied by the spreading branches of stately old trees. It is a refreshingly cool walk well into the midafternoon.

So many sheep herds along the trail, and horses. The rains have given the animals some lush grazing pastures. (Click on individual pictures to expand view.)

Sheep were a recurring theme along the river.

Just another section of the Rio Laja trail, skirting a tree stand. 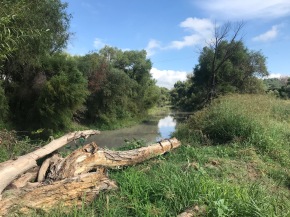 The Rio Laja, heading toward Antotonilco.

The remains of Puente Antigua San Rafael jut out into the Rio Laja. In the dry season, you can walk under the bridge. The trees in the center of the picture are actually growing on top of the bridge. They made for a nice shady spot to stop and enjoy a drink and snack. 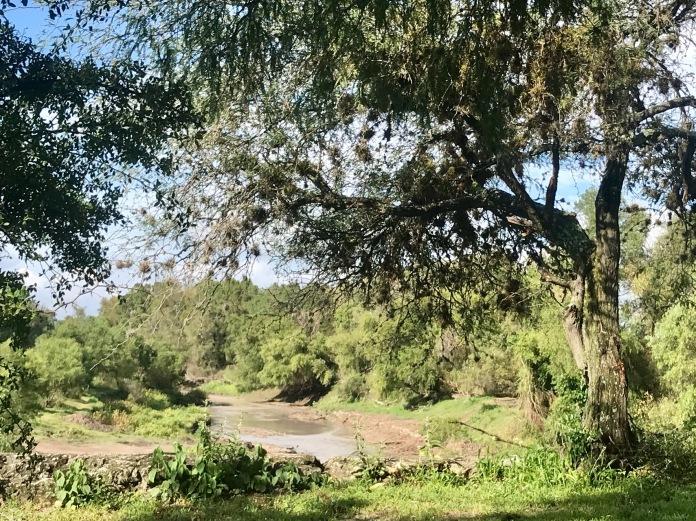 That is the Rio Laja below and this is some of the vegetation atop the old concrete bridge. New York City’s High Line Park has nothing on this spot!

Two views of the Rio Laja from the top of the Puente Antigua San Rafael:

View of the river flowing south toward the Presa Allende. 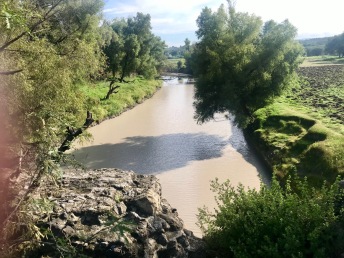 View of the river north, toward Antotonilco.

Snowy egrets and other winter birds abound along the Rio Laja, making for some excellent birdwatching. 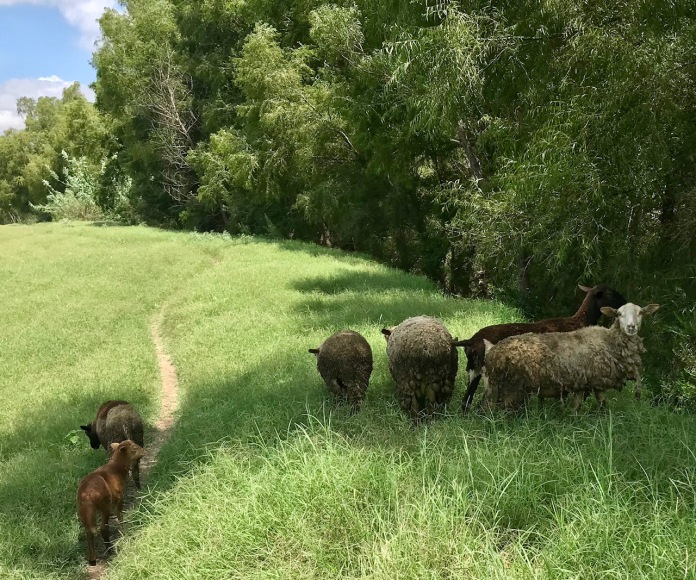 Sheepwatching isn’t bad either. Really, an awful lot of sheep were watching us and our presence moved them off their favorite path.

Sheep grazing, a sight that always puts you in a good mood no matter how tired you may be.

The young girl is walking a lamb on a leash. There were two baby lambs trailing them.

These boots are made for walking. On the left. Rose Alcantara’s Merrell boots bought a couple of months ago in Oklahoma. On the right, my Flexi boots bought less than 24 hours before we hiked the Rio Laja Trail to Antotonilco.