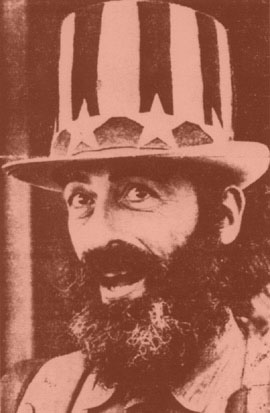 Back in 1975 while trying to write a short story in the noisy University of Rhode Island student union, a peculiar string bean with long, long black hair under an Uncle Sam hat leaped atop a table and began to preach.

He was an “abecedarian,” a practitioner of the magical art of distilling everything in the world to the number 22. He proceeded to assign numerical values to the letters of the alphabet: A=1, B=2, C=3. Pretty simple stuff. But then he would take a word or sentence and slice and dice it by the numbers and with enough leaps of logic and poetic manipulations all that was left, in the end, was the number 22.

My short story was about a rogue CIA operative who lost a daughter named Julia to drugs at a rock concert and avenged her death by killing Jim Morrison, Jimi Hendrix, Brian Jones, Janis Joplin … all with first or last names starting with a “J.”

Anyhow, I put the story aside and focused on the deranged individual who by now had the rapt and largely stoned attention of the whole student body.

He made his fortune by inventing a little thing he called two-for-one coupons. Remember those? You’d buy a book filled with “twofers” for restaurants, movies, ice cream, tons of great date-night things. It was a massive hit.

And he eventually crashed and burned and when the Phoenix arose from the ashes, he was Love 22.

He was running for governor because the RI gov’s office is No. 222 in the capital building and because the capital in Providence is the No. 22 point of interest on the official Rhode Island tourism map. These things were true. I checked them out.

One bogus but cherished item was the 22 dollar bills he handed out with his face on them. Those were keepers.

Once you start looking at life this way, it is very hard to turn away. Even to this day, I find myself pausing to look around when a clock hits 2:22 p.m., just to see if there is magic, whimsey or practical nonsense about.

I wrote about Love 22 for the local weekly paper, where I was working part-time.

A year and a few months later, I would find myself graduated from URI and the editor of that newspaper, The Narragansett Times.

Love 22 would drop by occasionally to announce wonderfully preposterous stunts like, he was going to set the world record for tossing a frisbee out to sea and catching it upon its return.

My favorite Love 22 stunt came around every Easter. In our neck of the woods, there were two fishing villages, Jerusalem and Galilee, divided by a wide channel. On Easter Sunday, Love 22 said, he was going to walk on top of the water from Jerusalem to Galilee.

I loved that but lacked the maturity and wit to appreciate the humor and write it up for our stodgy New England newspaper.

Did he do it? I don’t know. I had kids and Easter Sunday meant finding eggs, and refereeing chocolate-driven sibling spats, and reading the Sunday New York Times.

Not everything you love lasts forever. I moved on to a daily newspaper and Love 22 moved on to, well, god knows.

So what a shock to see that he is still alive and now running for president in 2020. Mark Patinkin, a PJB columnist I admired back in those days, recently wrote a column on Love 22.

As for that short story, I never finished it. Or maybe it was supposed to be a novel. Either way, Love 22 was a better story. Still is, apparently.