I was so taken with this stand of trees and the way the rising sunlight played through them, that I walked right past the arrow indicating our turn.

I awoke this morning without a trace of a hangover. Talk about small and unexpected miracles on the Camino.

Dinner at Fernanda’s table last night was an incredibly joyous gathering, fueled in no small part by bottomless bottles of wine, generous bottles of Tawney Port, and a clear liquid we named “Death In A Bottle.”

One of the forested paths that lead toward Ponte de Lima.

At breakfast, Fernanda was as cheerful as if she, too, had had a full night’s sleep. She was setting out the classic morning meal — meats, bread, cheese, jams, fruit, and coffee — as somnolent pilgrims stumbled in through the side door.

We greeted each other in whispers, as if fearful of upsetting some delicate balance in the universe. So different from the raucous festivities at the same table the night before.

Some had already left. Others still slept. Two by two and four by four and six by six — we’d all eventually hit the road, walking toward Ponte do Lima, a most beautiful name for a distant city. Regardless of when we left, I felt certain that in some respect we were all leaving together.

That connection would prove true time and again over the next week and a half. A community was forged last night.

At last, I felt a part of the Camino.

The Camino between Casa Fernanda and Ponte de Lima:

And our angel Fernanda? She doesn’t charge her guests. There is a box in the kitchen marked “Donation.” Pay what you wish. Pay what you can.

If there are saints to be named and venerated along the Camino, she is at the top of my list. And remains so to this day, although we were to encounter a few more angels along the way.

With hugs and almost tears, we left Casa Fernanda as the sun was just peaking over the horizon.

It took all of ten minutes for me to get us inexplicably lost.

We’d walked up a hill to an intersection — three ways to go, and not a single yellow arrow or scallop shell to point the way.

I stood there, pivoting to my left and right, craning my neck around bends in the road, looking for a sign, any sign. I dubbed this the “Camino Cha Cha.” I performed it at least once every few days. 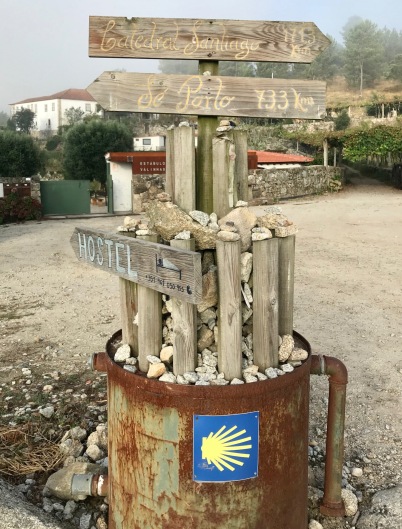 But here’s the thing: Every time we lost our way, somebody would appear from nowhere and point us in the right direction. Sometimes they wouldn’t say a word, just point.

One elderly man stepped out of his house and while delivering a rapid stream of Portuguese, he walked us around a corner and pointed to an obscure yellow arrow. With a quick “Bom Caminho!” he raced back into his house. One fellow simply whistled and pointed as he walked by. A woman in a coffee shop window looked up and pointed down one of two possible paths then returned to her newspaper and brew.

Which brings me to “The Truman Show.”

Do you remember the movie? Jim Carrey grows up on a massive soundstage designed to represent the perfect small town. He is oblivious to the fact that the entire world is watching him on a 24/7 tv channel. He is surrounded by actors who play his parents, friends, neighbors, shopkeepers, girlfriends.

Now, every time Carrey’s Truman seems headed for a moment of discovery or tries to leave the town, an actor emerges from the background and subtly redirects him back into the safety of the unscripted reality show that is his life.

I was beginning to suspect we were in our own “Truman Show.”

But no. People have been walking this path for hundreds of years. The people who guided our way were only doing what their parents and grandparents and great-grandparents before them had done.

I even began to appreciate the occasional absence of arrows. It forces you to maintain an awareness of your surroundings.

After all, if you walk all day long with your eyes cast down at your feet, you may as well be walking the Appalachian Trail. 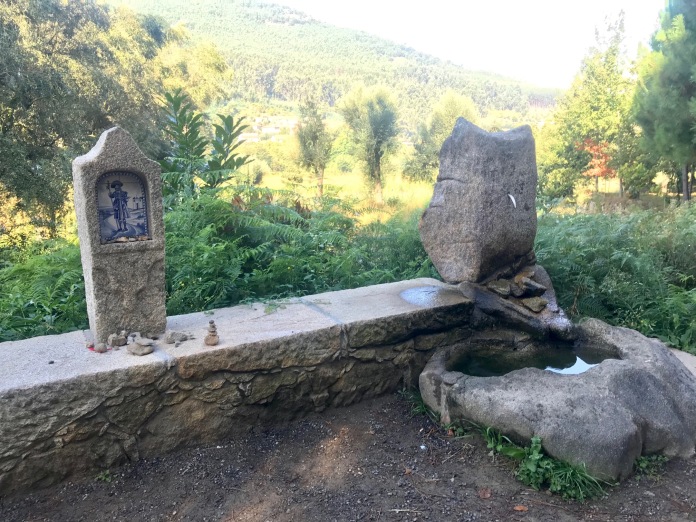 The more mountainous and remote the trail, the more we seemed to encounter natural springs where you could fill water bottles and just rest for a moment, listening to the sound of trickling water doing what it has done for centuries.

So, back to our plight. As I stood at the intersection, a man walking up the hill behind me pointed back from where he’d come. How far back, I didn’t know but we started back down.

Two blocks later, a lady in her yard pointed down the road to our left. And there was the arrow.

I had been so intent on photographing the morning sun slicing through a stand of tall trees that I completely missed the turn.

When we lived on an island in Belize, people drove around in golf carts. Here the tractor is the preferred mode of transport. Also, though everything is made of stone, it seems, these were the only stonemasons we encountered on our journey:

The walk to Ponte de Lima was our shortest yet, 15 kilometers.

Naturally, we ran into some of our dinner companions from the night before. We came upon the Brazilians sampling figs and grapes that grew within arms reach over the trail. We joined them for the moveable feast. I found some freshly fallen apples as well. We all posed for a group photo, too.

Farther down the road we came upon the French women. I cheerfully wished them a “goodnight” in my imaginary French. That brought them up short. In much better French, Rose explained that I’d hit my head severely as a young child, so what can you do? (Or something like that. I just know they were nicer and smiled sympathetically when we met up days later …)

They all laughed and we moved on. 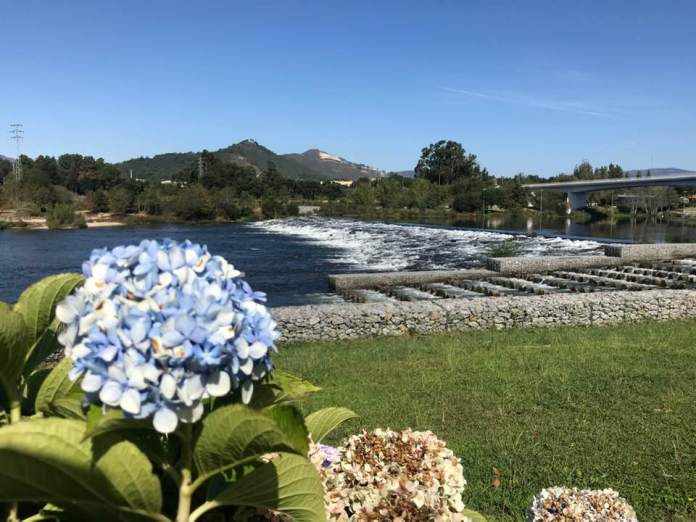 Rio Lima, just below the city, offers a beautiful gateway for weary walkers.

This day’s walk felt like being dropped into the middle of a fairytale. Portuguese farmers, some in white shirts and ties, buzzed here and there on their tractors. Grape-laden arbors offered shady canopies over flat cobblestone pathways. Forest trails were bursting with color as Autumn began making its presence known. Spider webs, shaped like upsidedown umbrellas, filled with the morning dew, glistened in the sun.

Was that possible? It was still morning.

Two cities greeted us with walkways of towering Platanus trees, here in Ponte de Lima, and later in Padron, Spain. Nothing in the world is more welcoming.

Minutes later, we are walking under the towering Platanus trees that shade Avenue D. Luis Felipe and the iconic bridge across the Rio Lima is just up ahead to the left.

Looming behind Lima is Alto da Portela Grande, the tallest peak on the Portuguese Camino and one we must deal with tomorrow.

For today, holy cow. We are here and it isn’t even lunchtime. A leisurely stroll across the river and two blocks up is the stately municipal Auberge Casa do Arnado. And there are only two backpacks positioned next to the front door.

Arriving in Ponte de Lima, and the municipal Albergue Casa do Arnado: 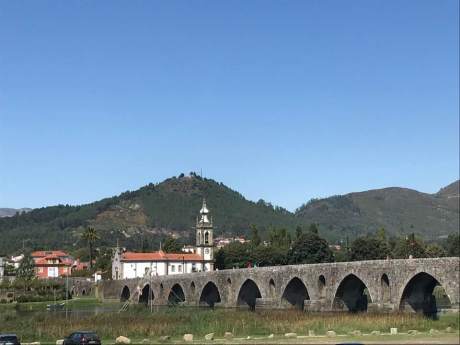 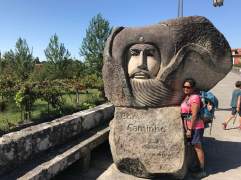 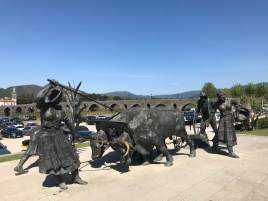 This is how pilgrims queue for a bed in the auberge. You arrive, drop your backpack at the end of the line then stroll off to find food and drinks. All very civilized. Since this place has 40 beds, chances are you’ll get one without queuing.

Clearly, on this day, there were two hikers who were bigger over-achievers than we were. Spoiler alert: The owners of these backpacks got up at 4 a.m. the next morning to leave, and none too quietly — says the guy in Bed #3. Four am! Who starts hiking at 4 am?

We dropped our packs against the wall and strolled 30 feet across the square to a white tablecloth cafe where we feasted on the local farm-to-table fare and Bock beers until the auberge opened for the day.

For the first time, we had a whole afternoon to explore. The heart of Lima lies across the bridge, so naturally, we walked back once we’d settled in. As the oldest city in Portugal, Ponte de Lima is a deep dive into centuries-old buildings on cobblestone streets too narrow for vehicles. It is a town that draws you in, entices you with sharp turns and receding alleyways and curious shops. 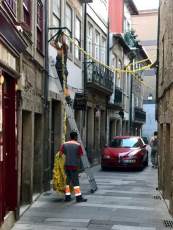 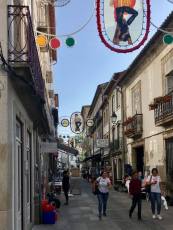 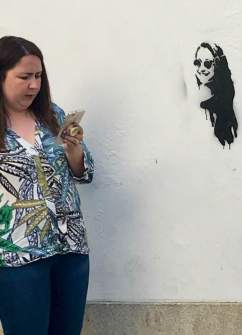 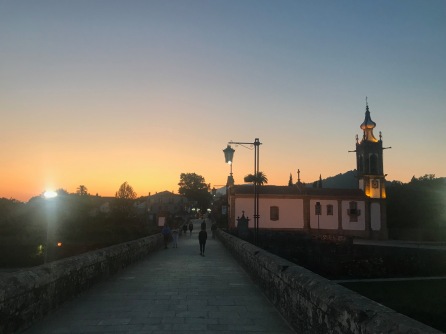 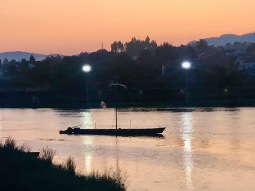 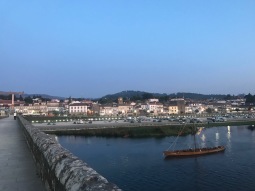 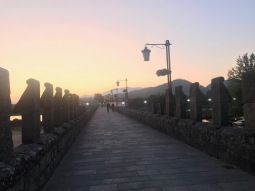 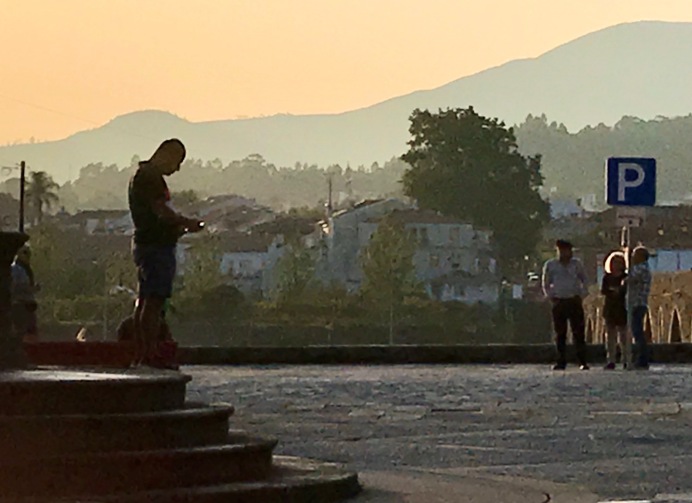 If you can resist the temptation to walk about, after a day of walking, there is a sprawling sidewalk cafe directly across from the bridge with a generous carafe of sangria with your name on it. So you sit and watch the parade of people pass by. Let them do the walking. It is sangria time.

And so we sat waiting for the sun to dip behind the mountains before we went in search of dinner. We watched the dusky glow as it backlit Alto da Portela Grande, illuminating in fine detail the challenge before us in the morning.

And we talked with Robyn, at the next table, a retired Naval logistics officer from Colorado who jumped into the Camino only the day before (and called a cab when the first day’s hike proved too rigorous).

“I just decided to do this thing,” she said brightly. “Training? I walked five miles last week.”

Her husband, also retired Navy, wasn’t going to have any of it. He drove their rental car up to Valenca, on the border with Spain, and checked into a top-flight hotel. He would wait patiently for her arrival at a sidewalk cafe behind the fortress walls of the ancient city.

Robyn became our hiking companion the next morning and proved to be delightful company and a lot more fit than she let on.

As for dinner in Portugal’s oldest city? We had a pizza. And it was delicious. Don’t judge me.

One thought on “Finished walking by noon? I think we’re getting the hang of this Camino thing”