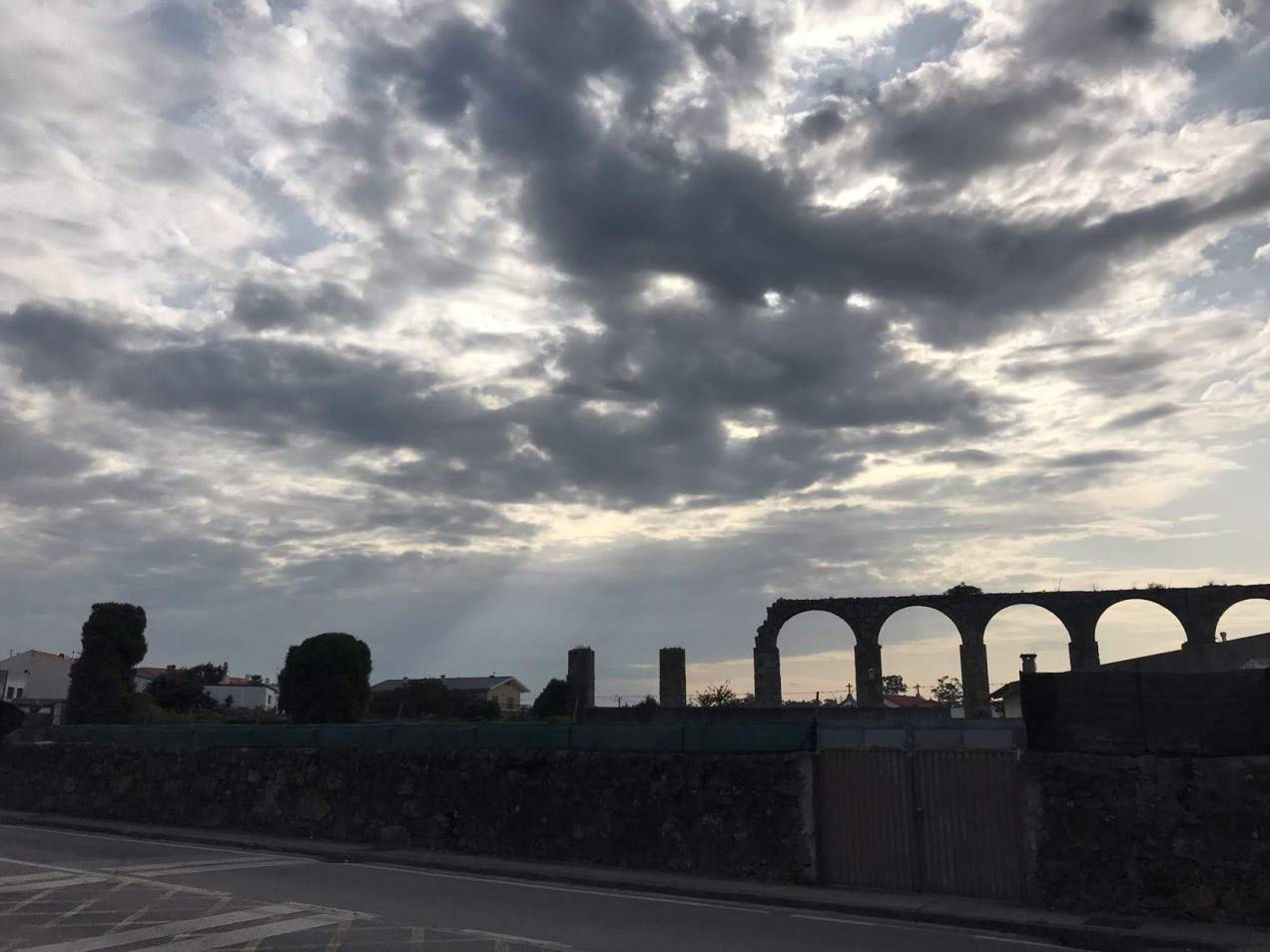 It is hard to look at the remnants of the 999 stone arches that comprised the base of the Aqueduto de Santa Clara in Vila do Conde, Portugal,  and accept that at one time it was a colossal failure.

An aqueduct has one job, right? To convey water from one point to another with an MVP assist from gravity. I’m no engineer but it seems to me that, in building an aqueduct, slope is everything.

Remnants of the Aqueduto de Santa Clara in Vila do Conde: 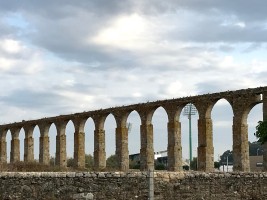 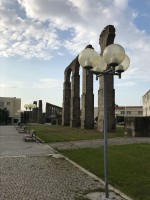 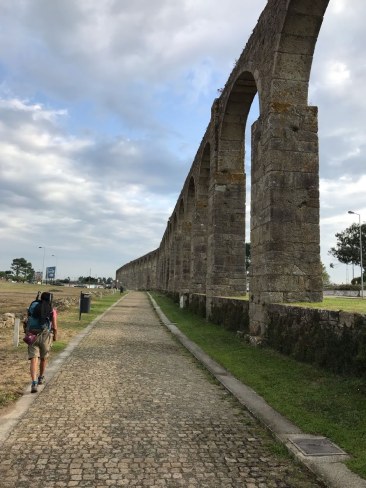 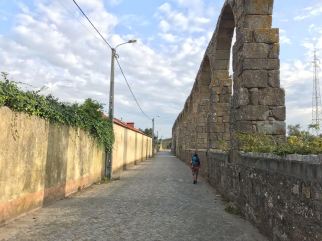 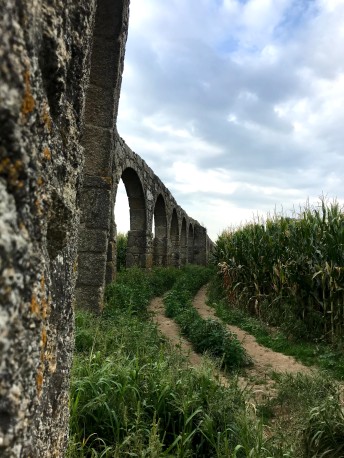 In this day of plastic and metal tubing and complex technologies, a system to convey water the four kilometers from source to convent would seem to be a piece of cake. Just make sure the backhoe doesn’t sever the fiberoptic cable lines.

Imagine doing the same thing in stone, in some places perhaps 100 feet above the ground. With the added necessity that it look damned beautiful — and last for the next five or six centuries.

When the nuns wanted water for the convent in 1626, they launched the Aqueduto de Santa Clara project. And it must have been beautiful when it was finished in 1714. But my guess is, nobody who started this project lived to see it finished.

Unfortunately, work ground to a halt in the 1630s when it was discovered that the slope of the aqueduct had been miscalculated. Too little slope, or too much, I have no idea. But it must have been a devastating error. Work didn’t resume until 1704.

I have no idea when Vila do Conde launched its municipal water system but that must have been an awkward moment for the nuns and their aqueduct.

The last arch of the Aqueduto de Santa Clara in Vila do Conde that we walked under before turning northeast toward Barcelos.

Early in our second day of the Camino, we followed the remnants of the aqueduct out of Vila do Conde. We had decided from the beginning that at this point we would turn away from the coast and hook up with the Central trail of the Camino.

In the early morning light, the remnants of the aqueduct project a tattered majesty. There is enough still standing for you to grasp what a grand spectacle this must have been in its time.

As a plumbing project, this thing is gonzo.

Some of the arches have been repurposed. Along one road that runs parallel to the aqueduct, homeowners have turned the arches into gated entrances.

Too soon, the arches curved west toward Povoa de Varzim and we ventured northeast, toward Barcelos in what, again, promised to be a very long day.

We’re in the country now, charming roads and forest trails to follow: 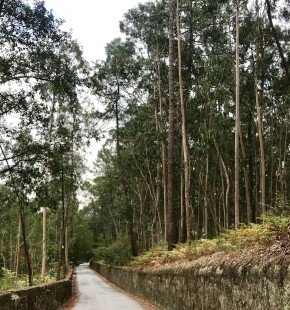 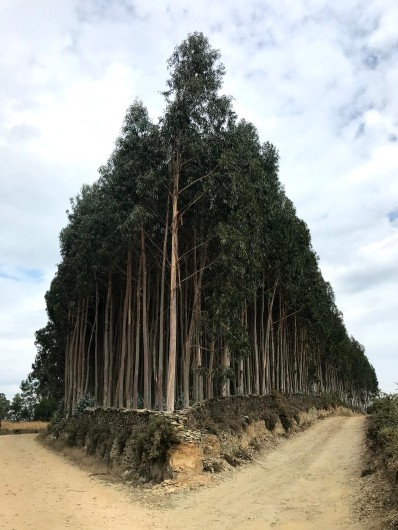 The terrain smoothly slid into low undulations overlayed by small villages, cornfields, and vineyards.  At last, we’d broken away from the gravitational pull of urban Portugal.

But where were the other pilgrims?

Choosing September-October to walk put us right into harvest time, and some mighty dusty roads: 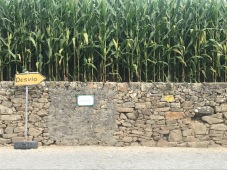 We walked alone nearly the entire day. Halfway to Barcelos we took a break in the small medieval village of Rates. The core of the town has been carefully preserved, right down to the Roman touches on a former temple, turned Catholic Church as conquerors came and went.

For a town that had been around since the 1100s, Rates was pretty empty. More like a ghost town. We wandered through the town square, peered around corners, into dark windows. It was like the Rapture took place while we were admiring cornfields. 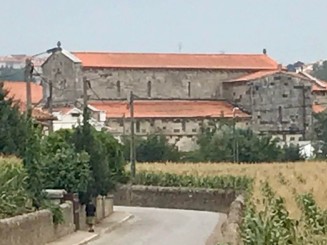 Except … From somewhere in the void, floated the lilting voices of children at play. We walked toward the sound, a school on recess perhaps, but couldn’t find it. We did find a coffee shop on the edge of the village. And were a couple of Camino walkers downing mid-day espressos.

As we filled our water bottles, drank coffee and munched on bread, several more people walked in. There was a shyness about all of us. None of us had yet experienced the crowded Camino roads we would encounter later on. We weren’t a community of walkers, just strangers with backpacks and walking sticks, stopping for coffee.

We did chat for a while with a couple from Ethiopia and, delightfully, we ran into each other several times more along the way. Add them to the list of people I wish I’d connected with by e-mail. Each time, we’d say, “Let’s have dinner or coffee, the next time we meet up!” It seemed like one or the other was always finishing a meal when we next met.

And yet, our paths seemed fated to cross. I had that feeling, or delusion, with a number of people we met along the way numerous times. Camino veterans say it is common to encounter the same people. I mean, sure, we’re all walking the same road. But I couldn’t shake the feeling that there was a spiritual reason that we all kept meeting.

Damned if I know what it is.

Oh, and later that day we encountered a llama. Of all the animals we encountered on the Camino, this we the most unexpected. I was trying to take a photo of two beautiful horses, one white, the other brown, when this llama jumps in front of my picture and mugs for the camera. I guess a lot of people must stop there to take a photo. This guy sure knew what he was doing. 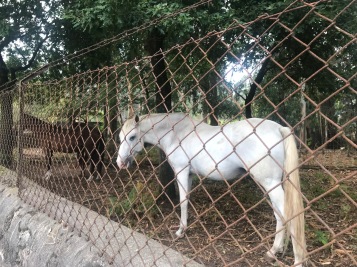 We didn’t quite make it to Barcelos.

The day was growing long, the skies were turning gray, and our feet were turning into granite when we reached the outskirts of the city, a suburb called Barcelinhos. We knew Barcelos was a beautifully preserved medieval city that started as a Roman encampment. 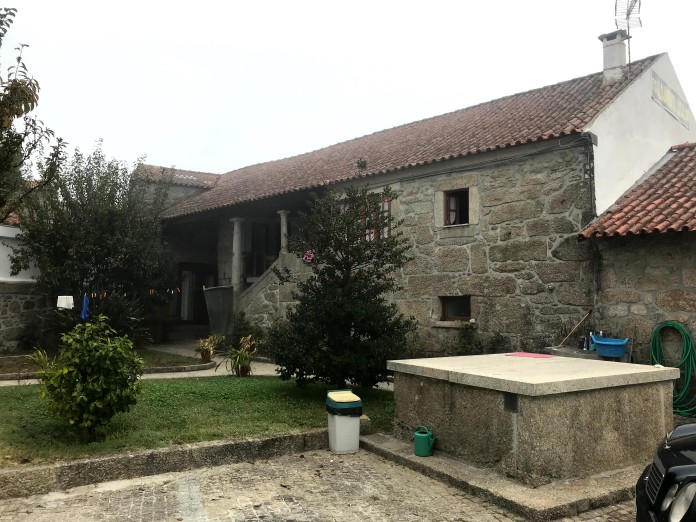 Diora Hostel on St. Michael Angel street in Barcelinhos, a refuge after a long day’s walk.

Barcelinhos is what happens when you build a legal barrier around ancient structures to hold back the rising and unsightly crush of modernity. Yes, Barcelhinos is where you stash all the chain stores, franchises, cheap hotels, vacant storefronts, and mediocre restaurants.

But there was also Diora Hostel, a relatively new auberge on St. Michael the Angel Street. It was inside a stone-walled compound and had an inviting grass courtyard. And it had beds. And it was one step off the Camino path. And we were exhausted.

So we opted for the sure thing, rather than walking farther into the uncertainty of Barcelos.

The owner met us with the kindliest smile you can imagine. And yes, he had beds available. Real beds. We shared a large room with a young man from Hungary and a woman from Spain.

Our host quickly got us settled and oriented. The laundry is outside, the bath is next door. The kitchen is open to all and help yourself to breakfast in the morning. For dinner tonight, there is a pilgrim’s restaurant a couple of blocks down the street.

This is the parish church in Beiriz, about 7 km north of Vila do Conde. The white-wash, neo-classical church,  built in 1872, is a nice departure from the heavy stone, built-for-eternity look of most churches. A plaque on the front gives “thanks in no small part” for the emigrants from Brazil who contributed substantially to its construction. Nice to see emigrants being thanked.

“Come see me after you are all settled. No hurry. I’ll be around all evening.”

And he was, helping guests with the next leg of their journey, offering encouragement, dispensing advise. He hovered like the protective San Miguel over all. Our first actual auberge experience and it was wonderful.

Yes, the Medieval bridge over the Rio Cavado was only a handful of blocks away but for the night, we’d found a real home.

At the Camino restaurant around the corner, O Cantinho do Peregrino, the owner and his wife took pictures of every diner, asked them to sign a guestbook, and handed each a pin to poke into their home on a map of the world.

That map was almost all pins and no borders.

I did, during the night as I drifted off into a deep sleep, and later, every time we broke bread at tables filled with people from all over the world. Which was many a night.

One thought on “At last, the Camino begins to move back in time, as we move forward”