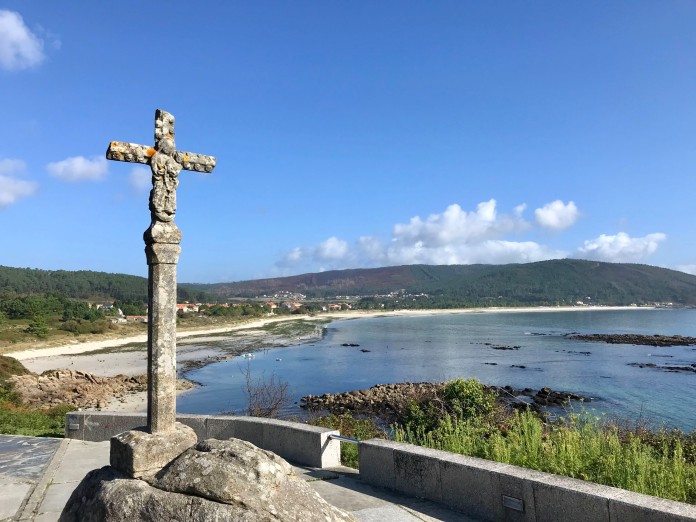 Overlooking some of the beach that extends west from the village of Finisterre.

Santiago de Compostela to Porto (160 km – felt like being in a sci-fi movie and life is playing out in reverse. Not recommended!)

There are so many ways to return to Porto at the end of your Camino walk. You can fly, take a train, take a bus, car pool (there’s an app for that) …

My advice is, whichever way you choose, put a bag over your head.

Sensory deprivation will be your friend.

Some of the fishing fleet in Finisterre, with an array of windmills on the hillsides.

You just spent 13 to 15 days walking nearly 160 miles, maybe more. At times it was magical. It felt like the clock had rolled back centuries, that you were among a rarified few people on this planet.

Your sense of time, place, and space has been unquestionably altered by your journey.

Then you hop on the bus.

The very grounds you just trekked with slow, arduous steps, the cities and villages you stumbled into with aching feet and a soaring heart, the forests and mountains you conquered one painful step at a time?

They now blitz past you at 70 mph.

“Scotty, we need to fracture the time-space continuum and back up two weeks in time. Can the Enterprise handle warp speed in reverse?”

“Aye, Captain. Soon as I finish my lunch.”

Along the N-550 slipstream the bus passes highway exits for Teo, Padron, Caldas de Rei, Pontevedra, Redondela, Porrino, Tui, and on and on to Porto airport where we first set down so many centuries ago as lost and humble pilgrims in a foreign land.

A journey of centuries is over in two-and-a-half hours.

The point is, the journey back to Porto was the most unsettling experience of the entire trip.

What you glimpse from the bus, and I assume the train, is the intense residential, commercial, and industrial buildup that is not evident when you are walking the Camino.

What you realize is that you have been walking in a bubble for two weeks and the developmental pressures on its walls must be intense.

What you ultimately feel is gratitude that none of this was apparent for most of your journey.

So this is why I say that if you want to hold on to your newly gained and hard-won perceptions about the world, then put in those earplugs, drop down the eye mask, and close the curtain. Pin a sign on your chest that says:

Wake me when it is over.

Because, if you are like me, you’ll never, ever want it to end.

Finisterre in the sunshine: 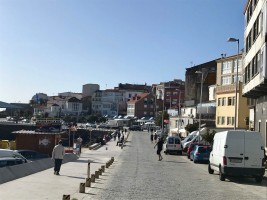 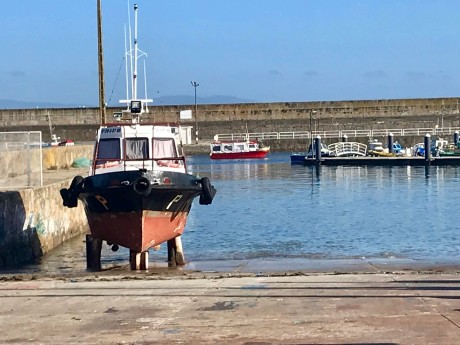 The local bus from Finisterre follows the coastline through dozens of small villages and beach towns and takes a couple of hours to reach Santiago but still arrives with plenty of time to connect with the bus to Porto.

We’ve spent two days at the “end of the world,” that pre-Columbus conceit that survives to this day. The little port was once the jumping-off point to the great unknown. Finisterre even translates to “end of the world,” although farther down the Iberian Peninsula, Cabo da Roca in Lisbon, Portugal extends 15 miles farther into the ocean.

I’ve begun to think that in their haste to conquer the known world, the Romans were rather reckless about naming things.

“Well, captain, we’re four kilometers past the little village and we can march no farther. I think we should call this Finisterre.”

If only the Romans had had the Internet. This town might have been named Pequeño Finisterre.

Finisterre in the rain: 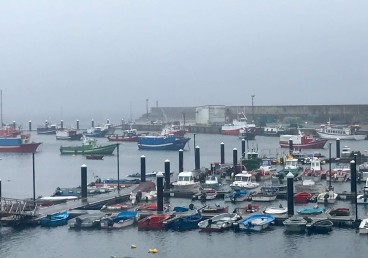 Once the world discovered that there is a heck of a lot more beyond the horizon, Finisterre settled into a more modest role as the supplier of seafood to all of Galacia. It feels like it has always been a tourist town, too — when the sun is out.

It is a great place for sitting in the broad harborfront plaza, sipping coffee and Estrella Galicia beer while munching on tendrils of baby octopus, or walking the expansive beach for hours to work up an appetite for that great late-evening seafood dinner.

Or, in my case, recover from the post-Camino flu, a breakdown of the immune system that strikes shortly after you arrive in Santiago. You drop all your defenses and all the body’s bugs that have been held at bay by sheer willpower take over. With vengeance.

Finisterre is a pretty nice place to recover.

That pile of rocks at the ocean’s edge four kilometers beyond the village is the ultimate goal of Peregrinos — sort of a spiritual finish for many hikers. Especially those who don’t normally live near an ocean, I imagine.

I’m told some hikers burn their boots and hiking clothes at the point. And I don’t know why. But I know of one hat and a few other items that my beloved partner would have gladly burned for me …

Finisterre is a 90-kilometer walk from Santiago — or a convenient bus ride.

We chose the latter.

We also opted not to walk out to the very end that first day, as the beach and cold beers beckoned and the prospect of sitting still in the late-summer sun was too enticing.

There is always tomorrow.

Well, the rain came with “tomorrow.” And stayed.

All we can do is spend a gray and wet Sunday on overstuffed hotel couches with our Kindles and hot coffee, then dash out during a break in the weather for a nice meal in town, and dash back before the torrent begins again.

The rain dogged us all the way back to Santiago the next morning.

Blue sky began to fight its way to the fore just about the time we boarded the bus for Porto.

Have a good Camino!

My favorite mural, statue and random animals in Porto: 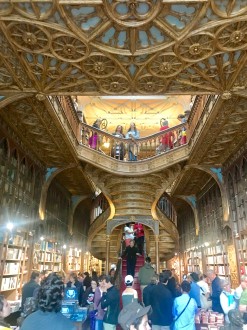 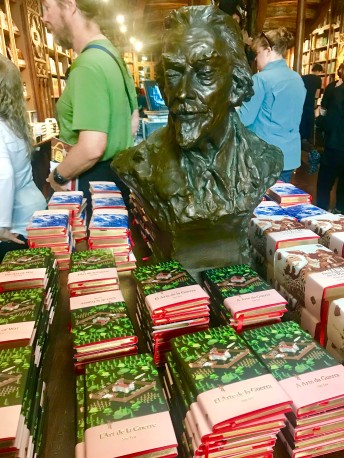 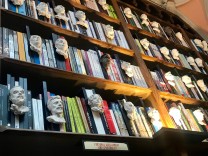 Every bookstore and library in the world should look something like this.

I am personally not crazy about standing in line to pay to walk into a bookstore.

I am crazy about the idea that hundreds of people every day are willing to pay to walk into a bookstore.

Do you think that maybe I fell in love with this city? Well, Porto and I are both consenting adults, although she is much older and wiser. 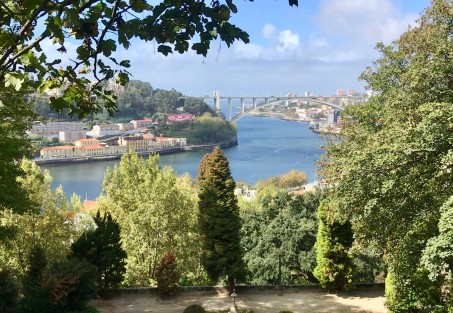 And Porto by night: 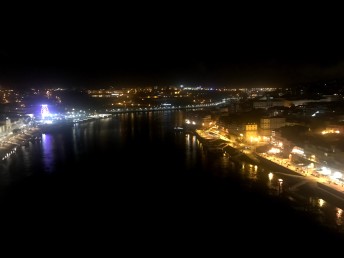 One thought on “Best way to return to Porto after walking for two weeks? With a bag over your head”